After exploring the Hagia Sophia we headed to the Blue Mosque. We had tried to visit the Mosque on our first day but our timing was off as we were about to enter when the Ezan, the call to prayer, was chanted for Ögle / Zuhr , the middle of the day prayer, and visitors are not allowed in the Mosque during Salah, a physical, mental and spiritual act of worship that is observed five times every day . The timing of each of call to prayer varies as Islāmic prayer times are set according to the movement of the sun, therefore it is a good idea to check prayer times prior to a visit to a Mosque. Please note that Muslim visitors are welcome to attend prayers. 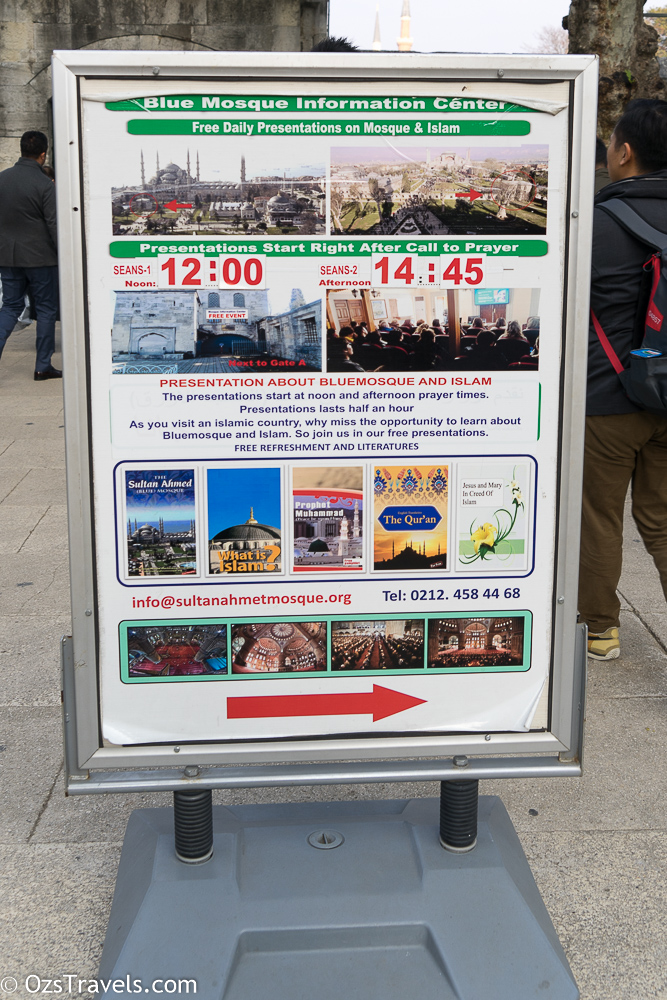 One of the educational services provided by the Blue Mosque is a presentation about the Blue Mosque and Islam, these are free of charge and start at 12:00pm and afternoon prayer times, I did not know about this until I read the info whilst processing this photo, thought that these were the prayer times. Something to check out next time. 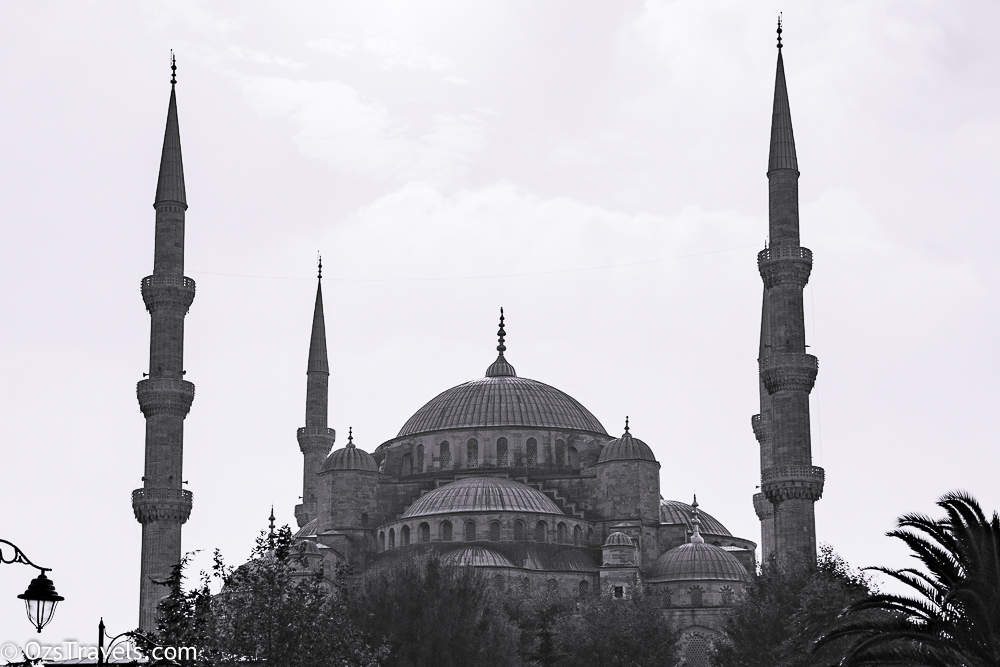 As we were arriving at the Blue Mosque one of the locals appeared and asked if we were planning to visit the Mosque, he then showed us where to go. A friendly guy who was trying to get us to visit his carpet shop, usually I find these sorts of people to be very insistent and sometimes aggressive, but this guy was none of that, just being helpful and hoping that we would visit the shop after we had been through the Blue Mosque, which we didn’t. He was waiting for us when exited, and was still quiet pleasant and seemed happy that we had enjoyed our time in the Mosque, he was not pushy about getting us to visit the shop, obviously he knew that unhappy customers are worse than no customers!! 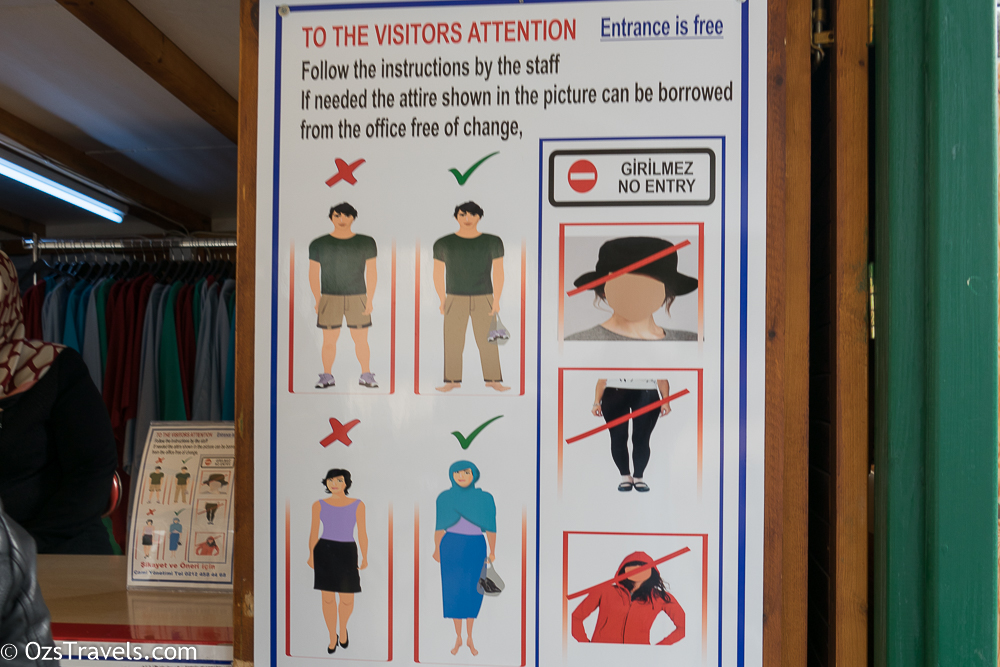 Before entering the Blue Mosque you need to ensure that you are wearing clothing that is acceptable, so women need to cover their heads, not wear revealing and / or tight clothing, wear long skirts or pants, men need to wear long pants and to remove footwear before entering. The Mosque provides head scarfs and wrap around long skirts to be worn over your own clothing for women to wear free of charge, don’t forget to hand back what you borrowed.

Sultan Ahmed I commissioned the construction of the Blue Mosque, which commenced in 1609 and was completed in 1616. Before the construction could be commenced a number of existing palaces had to be purchased and demolished. At the time of the building of the Mosque the Ottoman Ulema, Muslim legal scholars, were not happy with the construction of the Mosque, which would be the first new Imperial Mosque to be built in 40 years, as the funds to acquire the places and build the Mosque were drawn from the treasury instead of the traditional way, which was to use War Booty to fund these sort of projects.

The actual name of the Mosque is the Sultan Ahmet Camii, Sultan Ahmet Mosque. It is known as the Blue Mosque because of the ornamental blue tiles applied to the interior walls. The Mosque complex, Külliye, is composed of the tomb of the founder, a Madrasah and a hospice.

The Sultan ordered that six Minarets be built for the Mosque, which upset a number of people as it was presumptuous on his part as six equalled the number of Minarets of the Mosque of the Ka’aba in Mecca, to solve this he ordered a seventh Minaret to be built in Mecca.

In 2006 Pope Benedict XVI visited the Mosque and, standing next to the Mustafa Çağrıcı, the Mufti of Istanbul, and Emrullah Hatipoğlu, the Imam of the Blue Mosque, meditated for a couple of minutes. Pope Benedict XVI was only the second Pope to have ever visited a place of Muslim Worship. 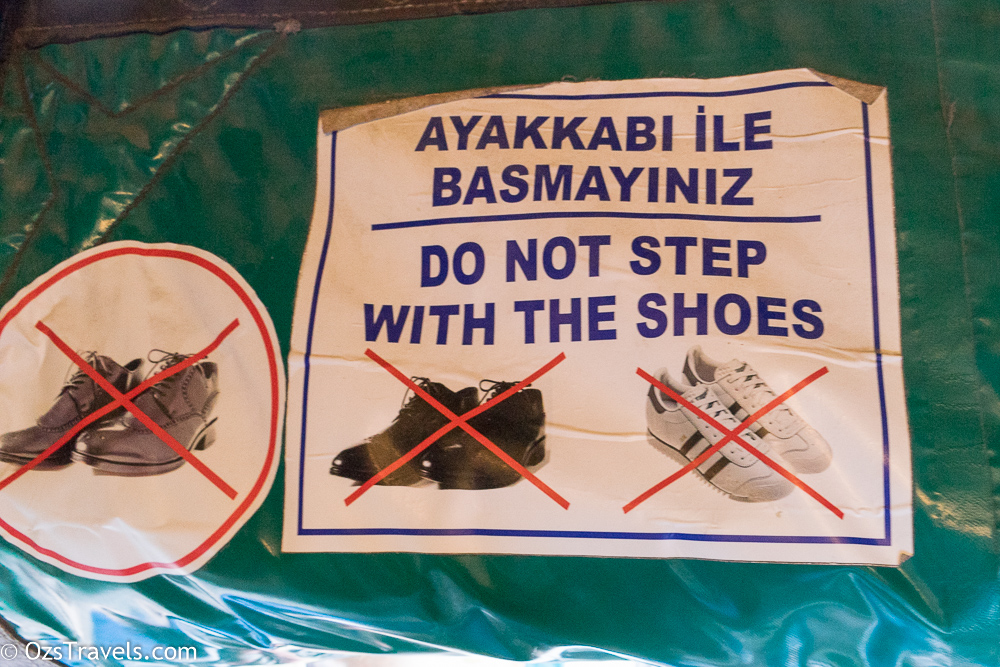 A sign to remind you not to take someone else’s shoes!!

Enjoyed my time in the Blue Mosque. I am amazed at how a structures like this and the Hagia Sophia were built when they were, especially when you consider that everything had to be hand carved and constructed.

Entry into the Blue Mosque is free, there is a non-compulsory donation box at the exit, you will even receive an official receipt, IMHO donations are warranted.

Another must see place in Istanbul!!

3 thoughts on “The Blue Mosque Istanbul”