Whilst in Vancouver I took a LOT of photos, these are a collection of some of them.

Whilst on the way to the Blue Water Cafe we drove past this interesting sculpture. The Trans Am Totem was created by sculptor Marcus Bowcott and was unveiled in April 2015. It stands 10 m / 33 ft tall and weighs 11,340 kg / 25,000 lb. 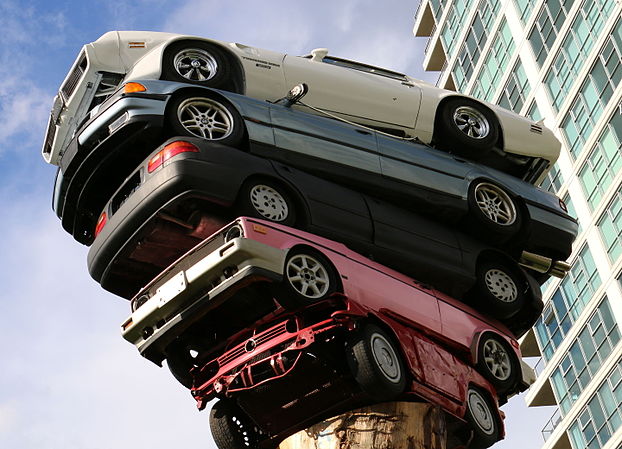 The vehicles include a 700 series BMW, a Honda Civic, a Volkswagen Golf Mk1 Cabriolet, with a 1981 Pontiac Trans Am on the top, they were all donated by a local scrap dealer. Solar power has been used to charge the batteries that power the head and tail lights of the cars. The base is an old-growth cedar tree from Vancouver Island. I like it!

We had brunch at the Northview Golf & Country Club on the Sunday I was in Vancouver. The grounds and the view from the Golf Club are not bad.

FYI, the Northview Golf Course was designed by Arnold Palmer.

In 2010 Vancouver hosted the Winter Olympics and as reminder of the games the Olympic Torch cauldron has been kept, I like it!

Random Photos of the Mountains

The view from nearly everywhere in and around Vancouver is amazing.

Next up photos of Fets Whisky Kitchen