This year’s event was managed by the Kiwis, they did a great job (can’t believe I typed that, joking my friends from the South Eastern Australian Islands). This included an Honor Guard of Royal New Zealand Navy and Royal Australian Navy Sailors.

The Australian International School provided the choir who which, as usual, added to the service.

This year is 100 years since the ANZACs fought in France at Bullecourt, Messines, and the four-month campaign around Ypres known as the Battle of Passchendaele. In 2017 there were 76,836 Australian casualties.

This years Catafalque Party consisted of both Aussies and Kiwis. In my youth I was a member of a couple of these and must admit that the L1A1 Self-Loading Rifle (SLR) looked a lot better than the Steyr that is now used by the Australian and New Zealand Armed Forces.

The Kranji Commonwealth War Memorial is where 4,458 Allied servicemen have been buried in marked graves of which over 850 of the graves unidentified.

(Not my pics, thanks to serametin and Bernard Goh courtesy of Flickr)

The columns represent the Army marching columns, the “roof” over the columns is shaped to represent the wings of a plane and the sail at the top resembles the fin or sail of a submarine. This something I just learnt, and maybe why I have such an affinity with the place.

The Memorial’s walls are inscribed with over 24,000 names of allied servicemen whose died in whilst defending Singapore and whose bodies were never found.

75 Years Since the Fall of Singapore

The Dawn Service was run like clockwork, the Last Post was played at just before Sunrise and the 2 minutes of silence ending at about sunrise when Reveille was played.

A Dawn Service to commemorate the fallen is apparently an ANZAC only tradition that started in Sydney on ANZAC Day in 1927. Originally attended only by Veterans and Servicemen with the day time commemorations attended by family and friends, these services are now attended by all. The Dawn Service is usually followed by a Gun Fire breakfast, milk tea (which usually has a GENEROUS dosage of rum added if it is made by my Submariner brethren). An ANZAC Day March usually commence at around 9am in every city and most towns in Australia.

The Dawn Service also includes the laying wreathes by dignitaries from various Countries and Armed Forces.

As always the Turkish Ambassador or their representative is invited to provide a reading as a part of the Dawn Service and they will always include a quote attributed to Ataturk. Ataturk was the Turkish General who lead their troops at Gallipoli and who became the first President of Turkey after the Ottoman Empire was disbanded.

Those heroes that shed their blood and lost their lives … You are now lying in the soil of a friendly country. Therefore rest in peace. There is no difference between the Johnnies and the Mehmets to us where they lie side by side here in this country of ours … You, the mothers who sent their sons from faraway countries, wipe away your tears; your sons are now lying in our bosom and are in peace. After having lost their lives on this land they have become our sons as well.

Another of the traditions is the reciting of The Ode of Remembrance.

They shall grow not old, as we that are left grow old:
Age shall not weary them, nor the years condemn.
At the going down of the sun and in the morning,
We will remember them.

We will remember them

We were lucky with the weather as during the Dawn Service the skies were clear, a couple of hours later it was pouring. 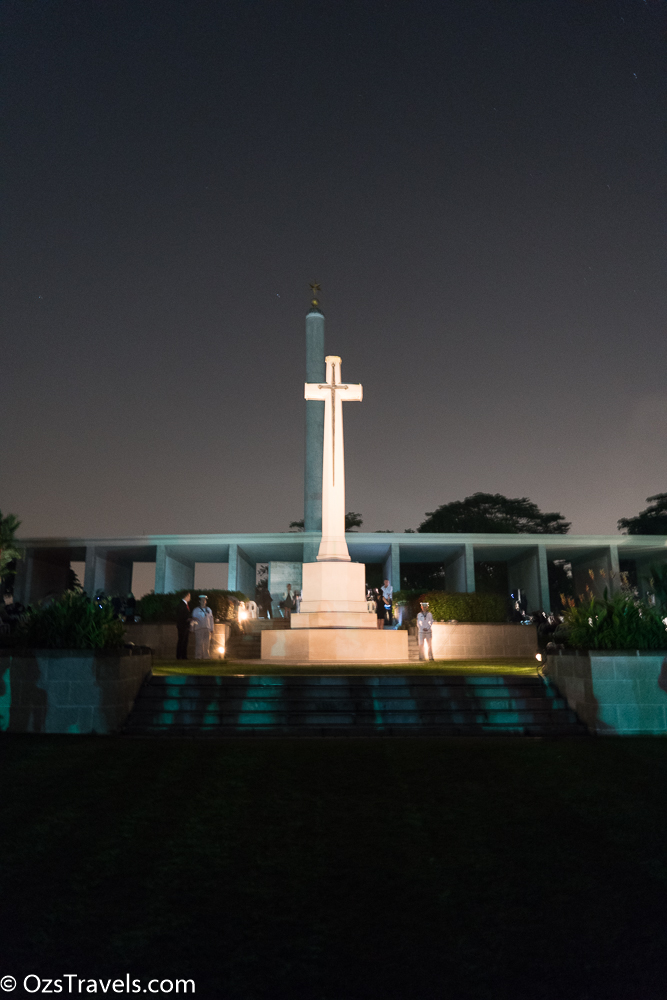