The last installment of my day exploring Dallas Texas, this is a collection of random photos from my wander around downtown. One of the things that did surprise me was how quiet it was. Most, if not all, downtown areas of big cities are usually always busy on a work day. Has anyone seen Cyrano?

The Dallas County Courthouse was built in 1892 and was designed architect Max A. Orlopp, Jr in the Richardsonian Romanesque architecture style, had to look it up!

The Dallas County Courthouse is now the Old Red Museum.

The original Flying Horse was erected on top of the Magnolia Petroleum Building, now the Magnolia Hotel, but was removed in 1999 to restore it. Unfortunately, due to neglect the original sign was not restored until Project Pegasus got together and remedied this. The restored Flying Horse is now displayed across the road from the Omni Hotel. Definitely a highlight for me.

The one souvenir I wanted in Dallas was a Flying Horse Ball Cap or similar. Could not find one anywhere, guess I will have to find one online and buy it that way. Will not be as “memorable” as buying it in Dallas Texas.

Another surprise was Founders Plaza, which is adjacent to the Dallas County Courthouse and the JFK Memorial, another “oasis” within the Dallas Downtown area. The Plaza includes:

This small log structure is a replica of the home and trading post erected in 1841 by the founder of Dallas Texas, John Neely Bryan.  In front of the cabin is a Texas Highway Department memorial

No idea what this fountain was meant to represent, but I liked it. 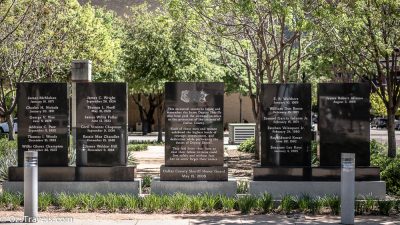 This memorial stands to honor and remember the brave Deputy Sheriffs
who have paid the ultimate sacrifice in the protection of the citizens of Dallas County.

Each of these men and women exhibited the highest levels of courage, commitment,
and dedication while performing the duties of Deputy Sheriff.

They laid down their lives so that their fellow citizens live safely and without fear.

I stumbled upon Lubben Plaza during my walkabout, was not expecting to find something like this. The area is a 1 acre special use park that was developed by Belo Corp commemorate the 100th anniversary of The Dallas Morning News in 1985. There are three large sculptures that were added to the park in 1992 and 1994. A nice place to take a break and enjoy the day. 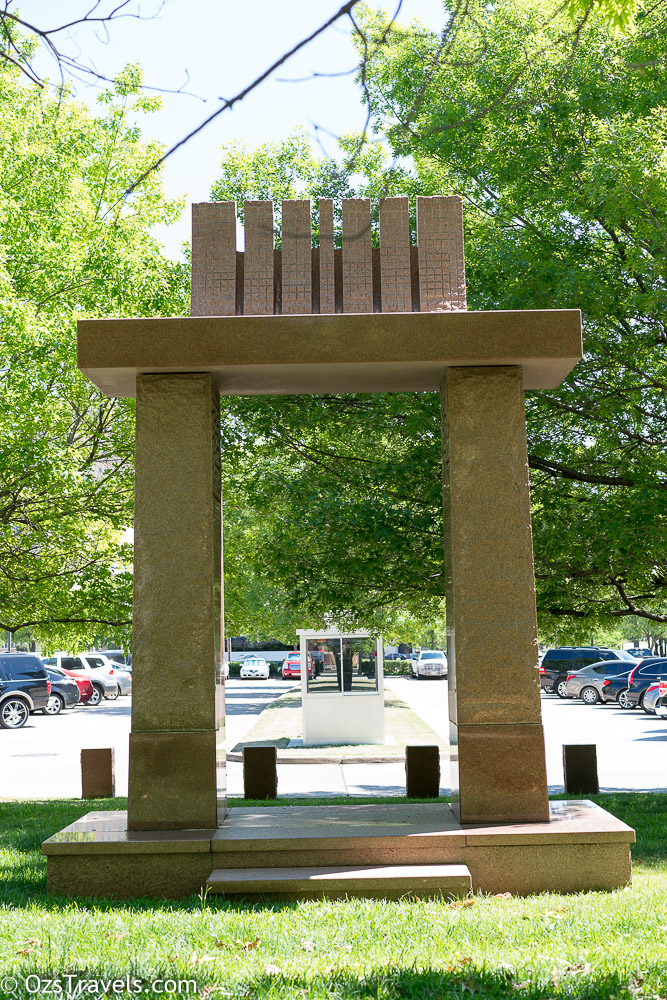 Recalling the ancient post-and-lintel portal form, “Gateway Stele” is made of Fredricksberg granite in a universal statement of civilizations coming together. It is functional, both as a passageway to be walked through, and as a place to remain, sitting on the surrounding natural bench.

The idea for ‘Gateway Stele’ comes from the traditional stele form, which is a monolithic stone with hieroglyphic writing. The posts of this portal have my writing in the patterns of squares cut into the stone. Just as we can’t translate the cryptic messages in the ancient stele, my ‘writing’ has no real translation, but it is meant to be interpreted on a visual basis.”

Unfortunately the view behind this sculpture was a carpark and the beautiful tree behind it prevented taking a decent photo from the other direction.

Inspired by the art and architecture of the traditional African society known as The Dogon in the West African Republic of Mali, “Journey to Sirius” incorporates two monumental structures formed of welded steel plates addressing one another diagonally across a bed of black rock.

“For more than ten years I have been producing sculptures inspired by The Dogon. This fascinating African society resides in a spectacular rocky region of the Republic of Mali called the Bandiagara Escarpment. The Bandiagara cliffs stretch for 125 miles parallel to the Niger River with many sections reaching a height of 2,000 feet. It is these steep, rocky cliffs that brought about the ideas used in the creation of ‘Journey to Sirius’.

On the face of the cliffs, The Dogon create their art and architecture, which consists of carvings and drawings representing mythical ancestors that are part of their elaborate cosmology, including the mythical star, Sirius.

The geometrical surfaces of the two super structures in ‘Journey to Sirius’ are an interpretation of the natural geometry found on the face of the Bandiagara cliffs and represent matter; while the sculptural forms that cantilever from the structures represent spirit and were inspired by the cliff paintings and high relief carvings found on the cliff dwellings of the Dogon.”

“Harrow” makes a full revolution every 24 hours, leaving a track of concentric circles in the sand. 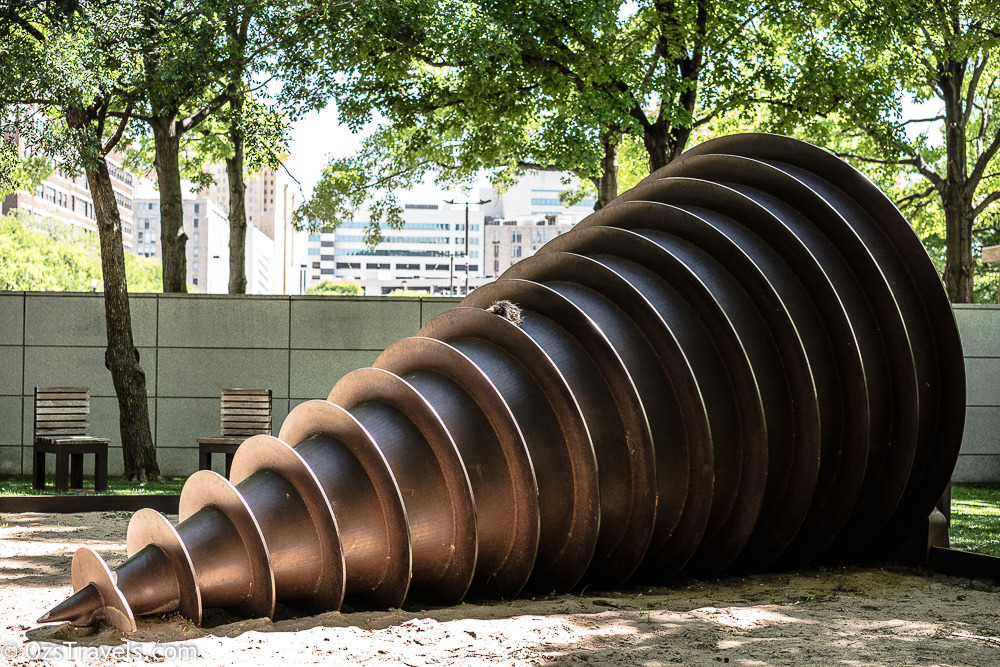 Combining elements of time, motion and place, “Harrow” is an installation of many materials and elements. The motorized cone of Cor-Ten steel turns on a circular track completing one revolution in 24 hours. As the cone turns, its bands travel through a bed of sand forming concentric rings, Seats of Cor-Ten and wood are placed in informal groups amidst trees outside the circle of sand.

James Cinquemani designed and produced the mechanical elements of “Harrow”.

“I am interested in the idea of placemaking, of which this is my most obvious manifestation. Of my works, ‘Harrow’ is the most active and on the contrary the most serene and contemplative. The repetition and constancy of the bands of the cone drawing in the sand symbolize for me the cyclical nature of life and the balancing of life’s events. The gesture is meant to embrace, to settle and to provoke thought. As with my previous pieces, ‘Harrow’ implies a human presence and dialogue.”

This was the most intriguing to me. What I did not realise is that the cone turns once every 24 hours, although I am not sure it was working the day I was there as I did not notice rings in the sand. 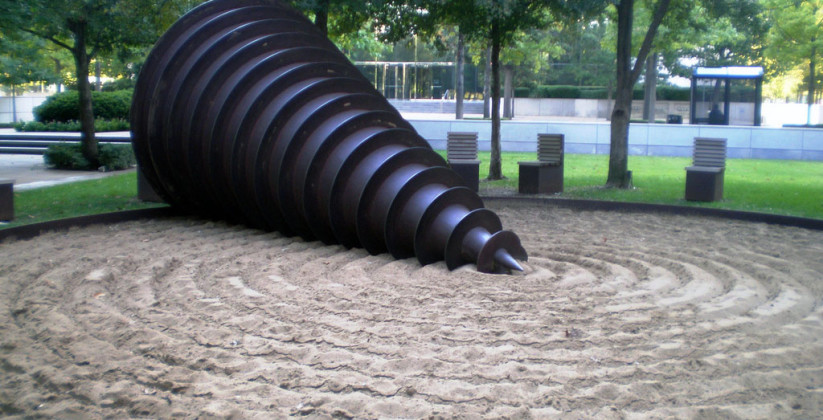 Next up the view from Reunion Tower.