İstanbul, what a place! It was, and still is, one of the cities that I have wanted to visit, as I had only heard great things about the place, the food, the history and the food. Three and a half days are not enough time to see all of the sights, but enough to know that I need to return for a longer stay. 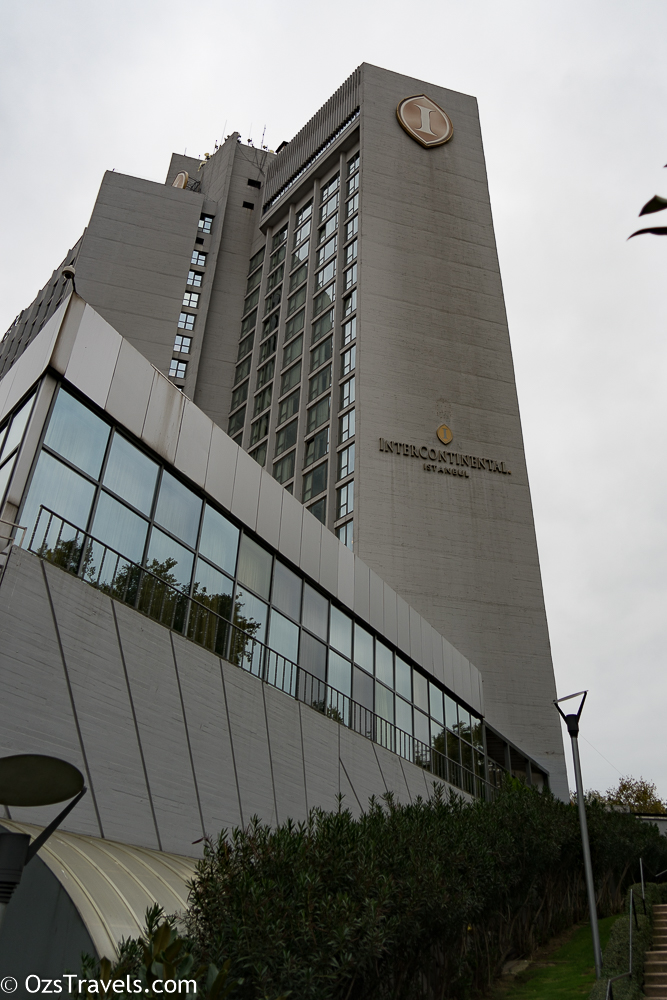 The hotel we stayed at for the duration was the Intercontinental İstanbul, which is situated next to Taksim Park and Square, not far from Taksim Train Station and the Füniküler that takes you to Kabataş interchange where you can grab a tram that crosses the Golden Horn and takes you into the Sultanahmet District. 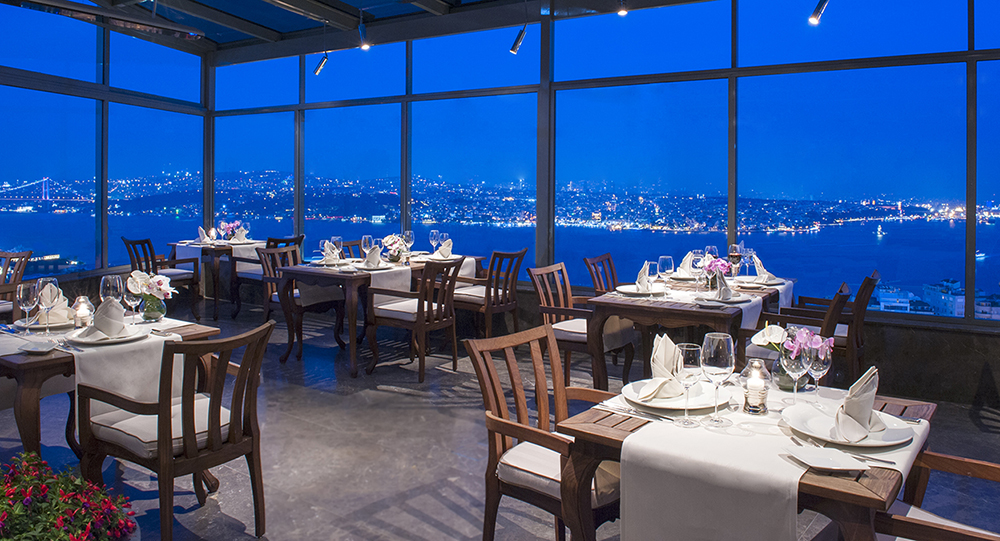 As we had had a couple of long flights / days and a few time zone changes we decided to try out the hotel’s Club Lounge and the Safran Restaurant on the top floor of the hotel.

As we were in Turkey and I had read a lot about how the quality of wine produced in Turkey has been improving greatly, I decided that it would be a good idea to try a Turkish Wine made from native Turkish Grapes. As I had no idea about what to try I asked the sommelier for help and he recommended a great bottle a 2011 Corvus, Öküzgözü – Boğazkere.

Öküzgözü and Boğazkeres are native Turkish grape varieties and from the Elazığ Province of Turkey.

A great choice, paired well with the dishes we had for dinner, full-bodied, deep garnet, with stone fruit and black pepper. Structured tannins and a long finish. Will be keeping an eye out for it, unfortunately I doubt that it will be available in too many places outside of Turkey, sounds like a good excuse to return.

Very good food, great wine and service make Safran a good choice for a quiet meal in İstanbul, would have liked to have returned to Safran for another meal, but just ran out of time.

Getting around İstanbul is fairly easy as the public transport is modern, clean and cost-effective. You can pick up an İstanbul Kart from all major transit stops and probably from a hotel Concierge like we did. One card can be used by multiple people and can be “topped up” at all transit stops and other places including, but not limited to, kiosks, news-stands, etc. The only “downside” is that the trams do get busy / packed, but, they are frequent so you can wait for the next one and hope that there is more room or just suck it up and deal with it.

First up we had to find the Taksim Train station so that we could grab the funicular from Taksim Square to the Kabataş interchange from where we would be catching a Tram to Sultanahmet. 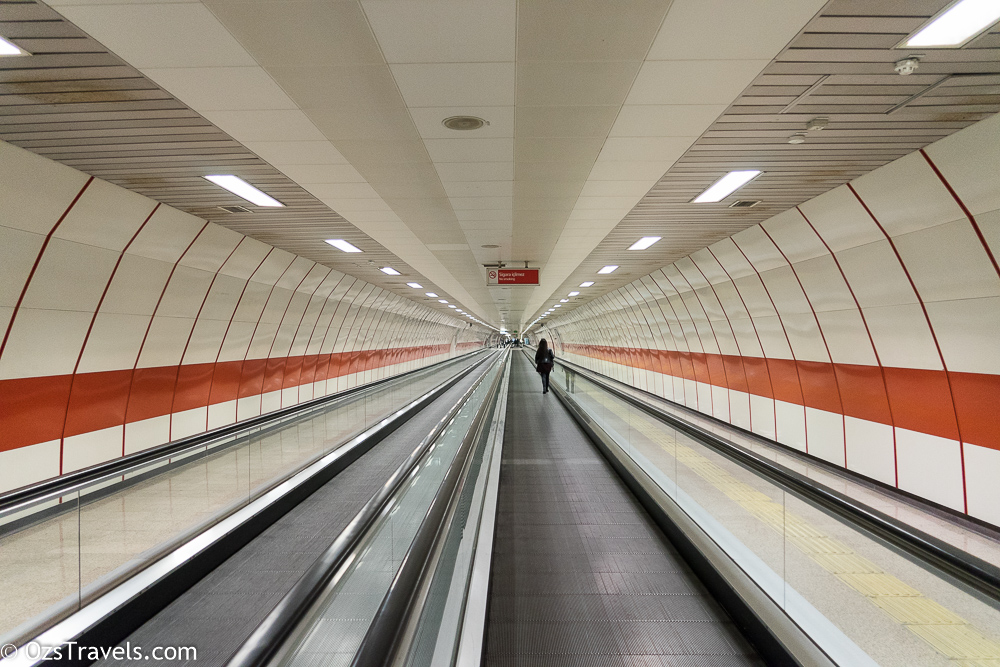 What I noticed about the station was how clean it was and the tiled mosaics throughout the place a lot more interesting that the advertising on the walls of most train stations around the world.

One of the great things about the area surrounding Sultananhmet Square is that a large number of the streets have been converted into pedestrian only or tram only access.

Our first stop was the Basilica Cistern (Yerebatan Sarayı – “Sunken Palace”, or Yerebatan Sarnıcı – “Sunken Cistern”). This is the largest of the 700’ish cisterns beneath İstanbul. It was built-in the 6th Century during the reign of Emperor Justinian of the Byzantine Empire. 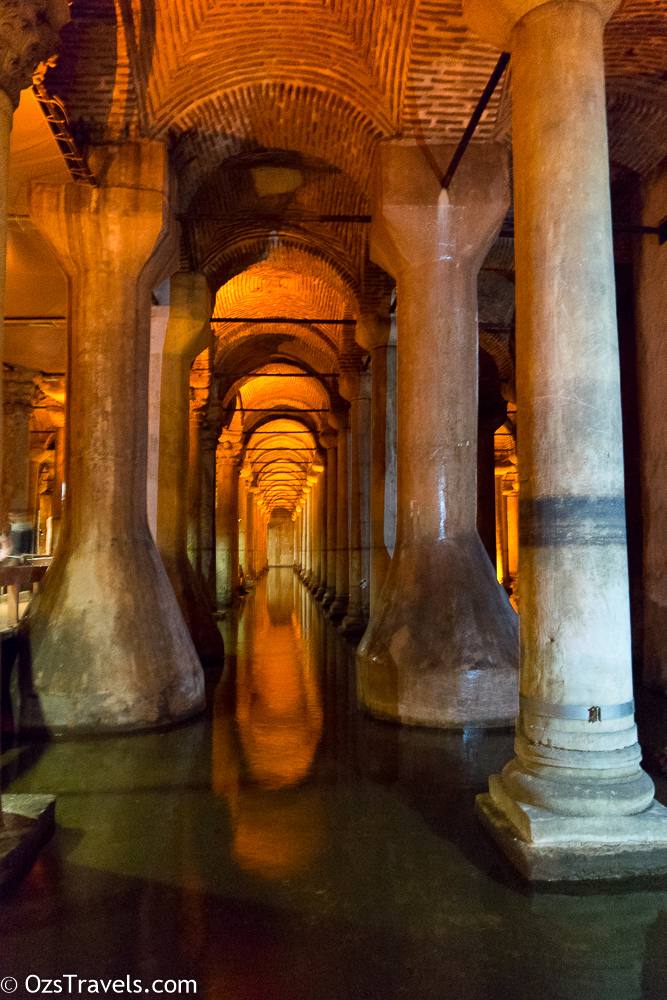 Most of the columns are not engraved but there a few exceptions. One column is engraved with pictures of a hen’s eye, slanted branches and tears. This column was crafted to pay tribute to the hundreds of slaves who died during the construction and is called the Column of Tears or Crying Column.

There are also two columns with Medusa heads used as their bases. Where these heads were sourced from is unknown and the reason why they were used is probably, like a number of the other columns and materials used in the construction of the Basilica Cistern, because they were left over from another construction project or reused from an “old” Roman building within Constantinople as they were the right height to be used as the base for their respective columns. One of the reasons that one of the heads is upside down and the other is on its side (although this may be because being on its side was because it fit better that way) is to negate the power of the Medusa’s (Gorgon’s) gaze.

A couple of points about the Basilica Cistern, there is a fee to enter and an extra fee if you want to use a tripod for photos, which I would probably pay for next time I am in İstanbul. It is definitely worth it and I recommend visiting the Cistern if you are in the Sulanahment area. Also, entry to the Cistern is not included as one of the sites you can visit with the Museum Pass İstanbul.

Next stop was the Topkapı Palace where we purchased the Museum Pass İstanbul. Recommend getting this as it will get you access to 12 museums and jump the ticket queues at each of them and be entitled to discounts at some outlets / stores with İstanbul. It is also not bad value for money @ 85TRY (Turkish Lira) / 29 USD and is valid for 5 days, there are also day passes. If you were to visit the main attractions, including the Haga Sophia, Topkapı Palace, Topkapı Palace Harem Apartments and the İstanbul Archaeological Museums, the total entrance fee for all of these site is 90TRY / 30USD. All of the museums that we visited were well-maintained and had something to interest everyone.

The Topkapı Palace (Topkapı Saray) is the largest palace in İstanbul and was the residence of the Ottoman Sultans for around 400 years, 1465 – 1856. The Palace is now a museum within of the UNESCO World Heritage listed site of the Historic Areas of İstanbul. This is one of the places that you really need to visit when in İstanbul.

The Palace is built upon a 700,000m2 area on the İstanbul Peninsula between the Sea of Mamara, Bosphorus and the Golden Horn. Construction of the Palace commenced in 1460 and was completed in 1478. 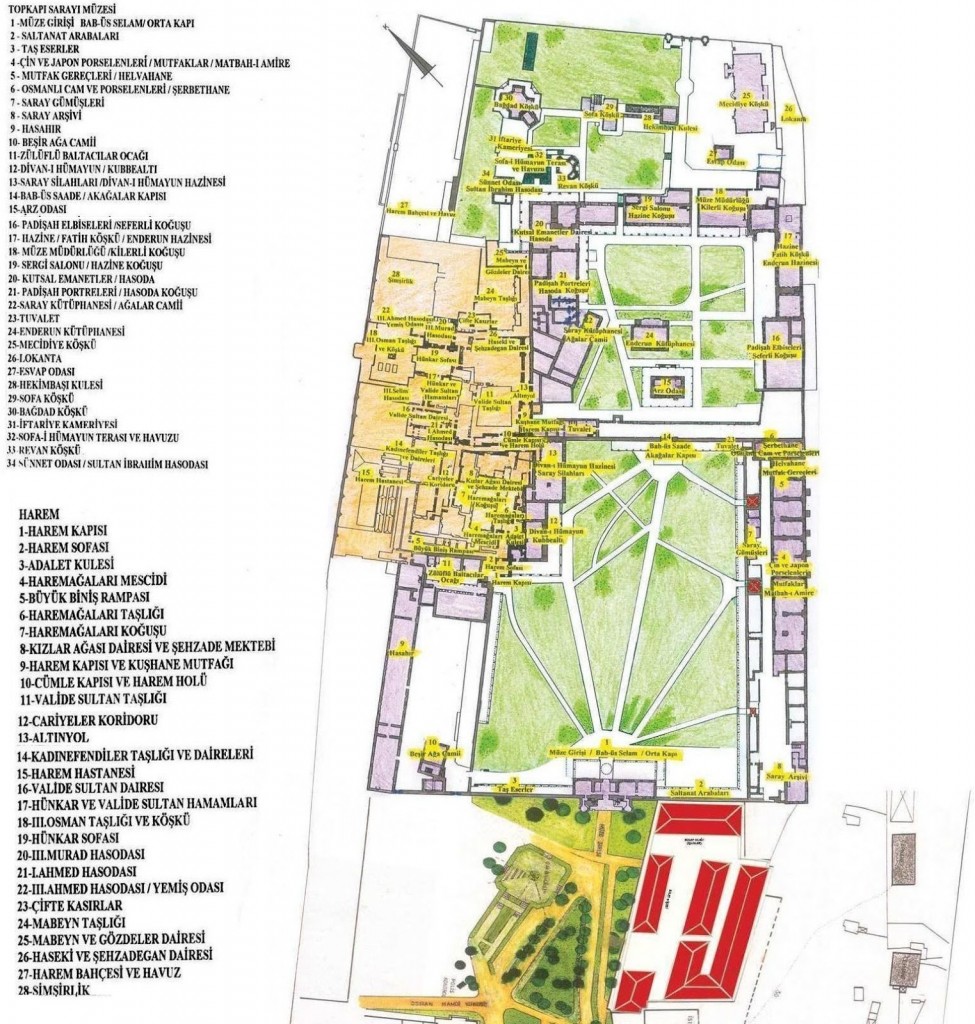 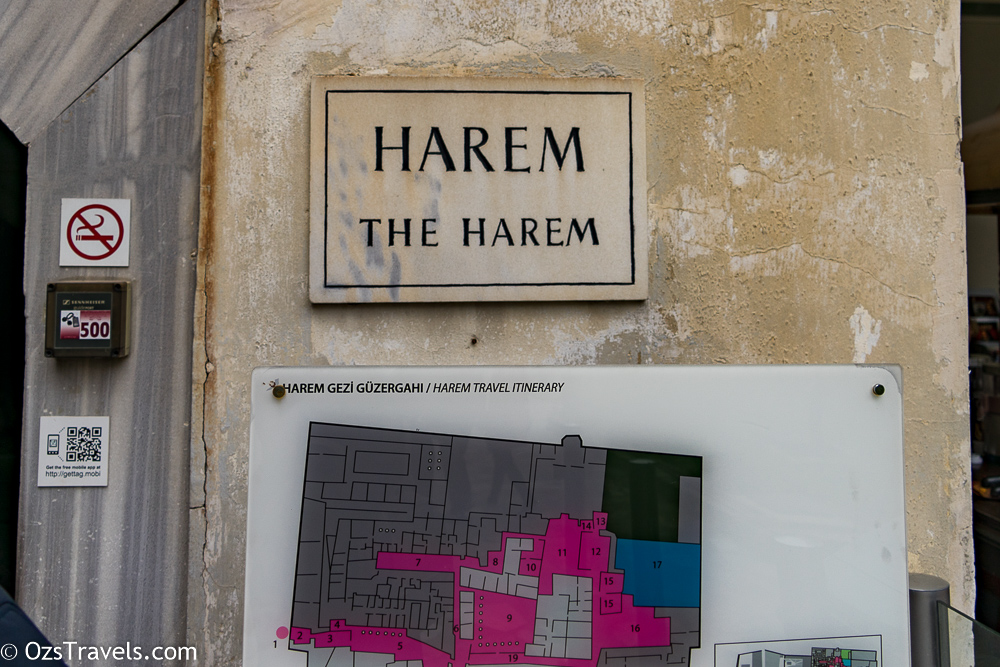 In Arabic, Harem means “A holy place that everyone is not allowed to enter”. The Harem Apartments is where the Sultan and his family lived, which included the Sultan, the Queen Mother, the Sultan’s women, children, brothers and sisters, his servants, concubines and Black Eunuchs. The Black Eunuchs were the protectors of the Harem.

The view from the Harem Apartments 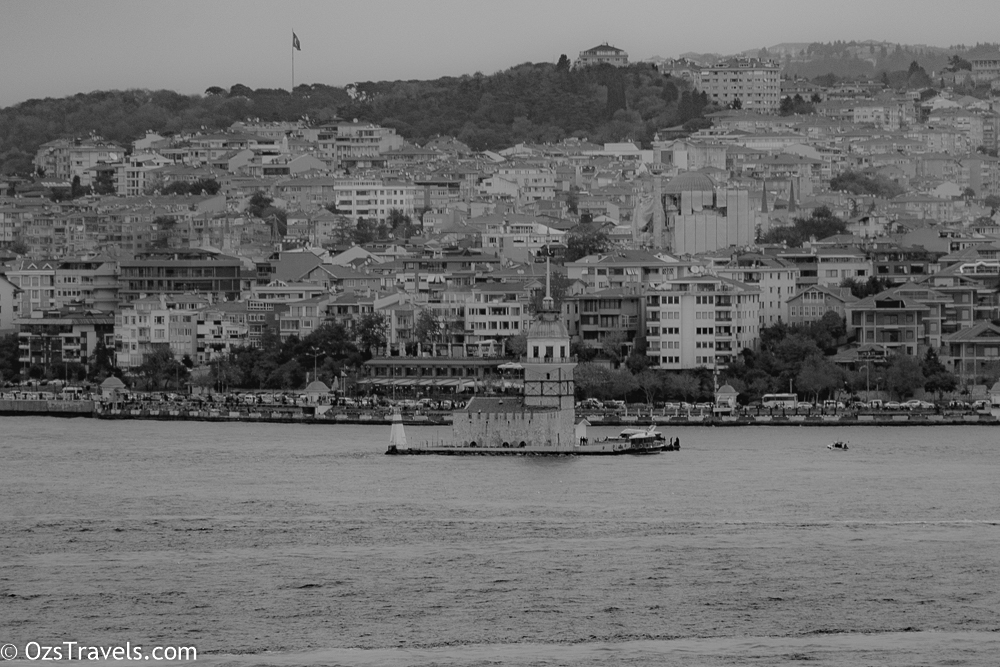 After finishing our visit to the Topkapı Palace Museum and Harem it was time to grab a late lunch before heading back to the hotel to get ready for the night. Lots of walking had built up an appetite and I needed a coffee (how can you visit Turkey and not have a coffee).

Everywhere we wandered there were shops selling Baklava and cafes so there were lots of places to choose from, we chose the Blu Kitchen. Nice place, good service, great food (there was way too much to choose from so we asked the waiter for help).

Next up was a Progressive Dinner on two Continents.