I was recently lucky enough to dine at Gaggan again, this time in the newly opened “Lab”. Chef Gaggan added to the existing plantation house restaurant a 2 level atrium, the top level of which is “The Lab”. 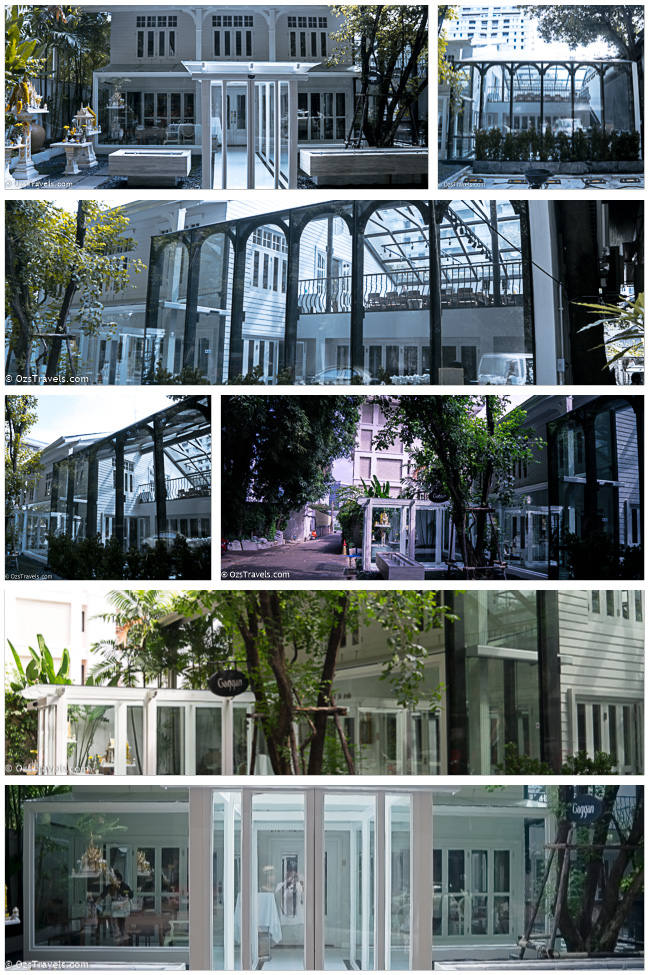 I like the new addition, it enhances the existing structure with minimal impact. What do you think? 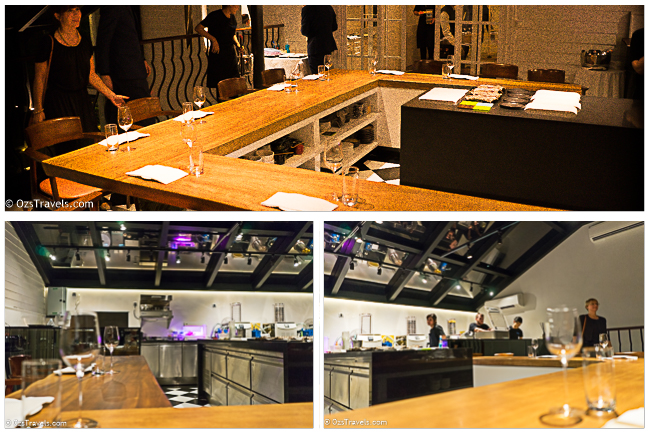 The idea behind the “Lab” is to provide diners with the opportunity to immerse themselves further into the wonderful culinary world that Gaggan has created. 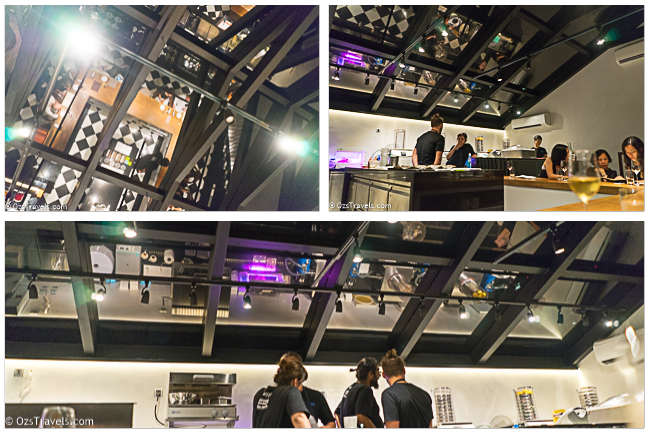 One additional difference to this meal is that the wines were chosen by Vladimir the Head Sommelier, who as usual, did a great job pairing wines with the different dishes.

To keep you guessing the menu provided at the start of the meal is a list of emoticons. 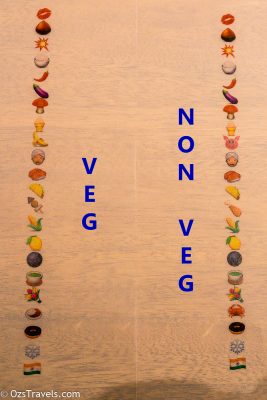 As always Gaggan likes to give you something “different” to start with in this case a pair of lips made from lychee, rose and yuzu. I liked them, similar to a Sorbet, cleansed the palate getting it ready for the gastronomic adventure we were embarking on. 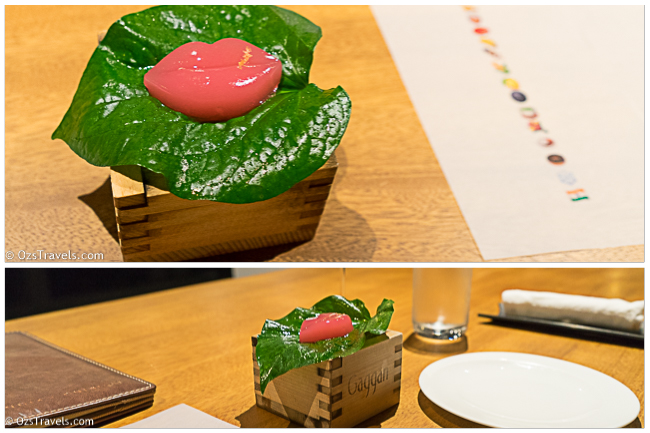 The next starters were the Plastic Nuts and Yoghurt Explosion, enjoyable as always.

Idly Sambhar was next up, slightly different from the last time I visited Gaggan, really enjoyed, nice and light, very tasty. 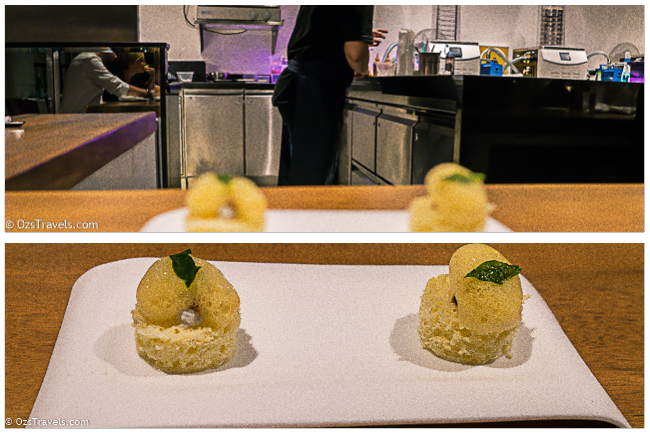 Next up was the Chocolate Chili Bomb – AWESOME. The right balance of Chocolate and Chili (well maybe a bit more spice would have been good for me, but probably not for the rest). 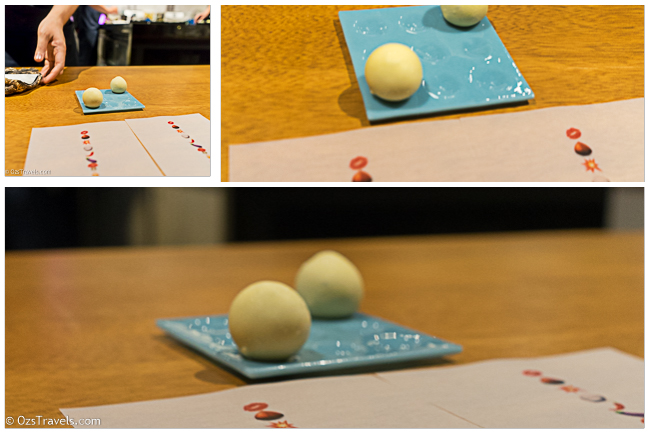 Next up was the curry cookie, this is uncooked, and extremely tasty. REALLY LIKED IT. So simple yet so good! The cookie is made from eggplant. 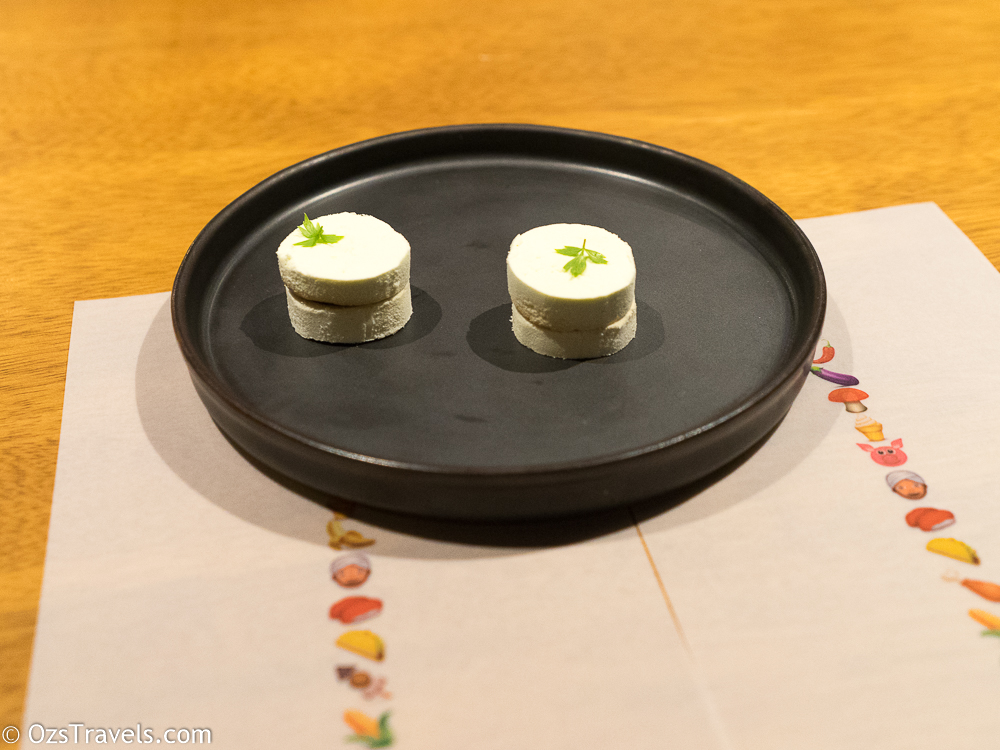 Ok so what do you think this is? On the menu it looked like a mushroom with a red top, it was a Ghewar Truffle. Ghewar, Gaggan’s interpretation of a traditional Rajasthani sweet, was the base with a curry topping. 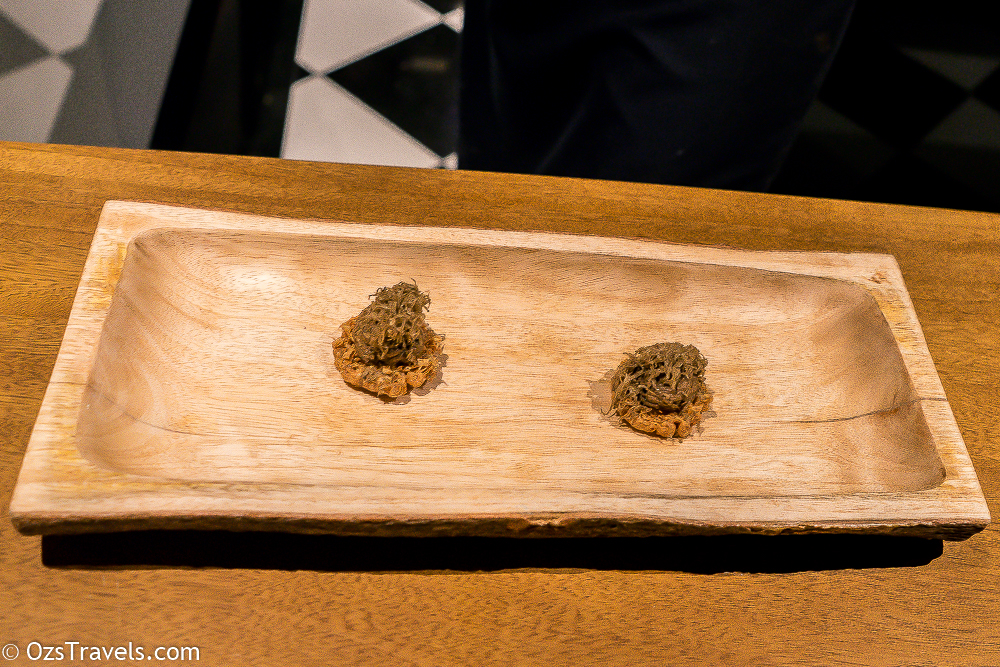 Up until this point the Veg and Non-Veg menus were the same. 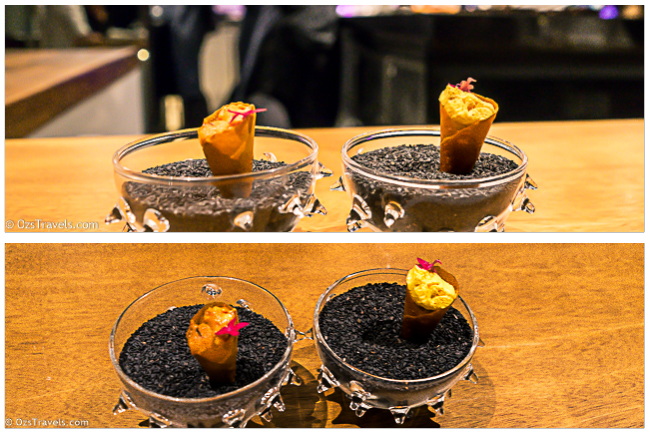 The two vindaloo options were Pork and Banana. The Pork was the one for me. I have never had a Pork Vindaloo before and I liked the flavour combinations, something to try cooking at home. Surprisingly the Banana Vindaloo was, IMHO, the better dish, but not by much. 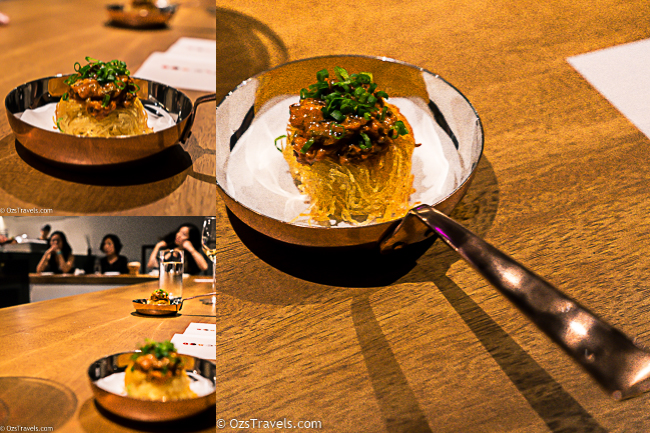 These were interesting, Gaggan’s interpretation of a North Indian Street Snack combined with his interest in Golf. This dish was the same for both Veg and Non-Veg menus. Great combo of coco butter, green chili, mint and something else I couldn’t pick, the “golf ball” shell was a nice touch. 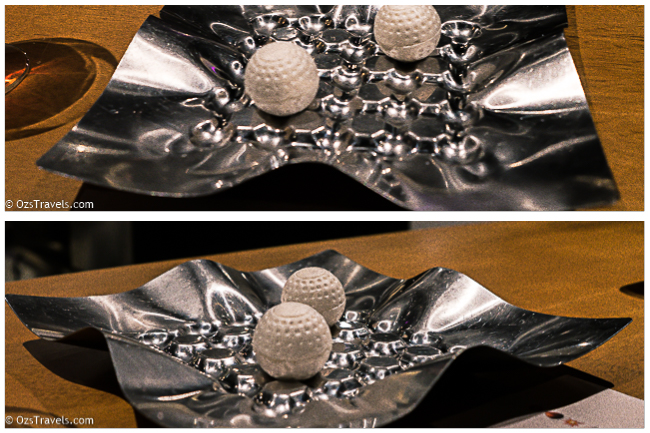 Was not expecting to eat Sushi in an Indian Restaurant let alone one in Bangkok, but would never say no, purely in the interest of learning of course.

The non-veg dish was Chūtoro Sushi, which is medium fatty tuna sushi. I liked it, nicely prepared, better than a lot of the sushi I have had from some sushi and Japanese restaurants. 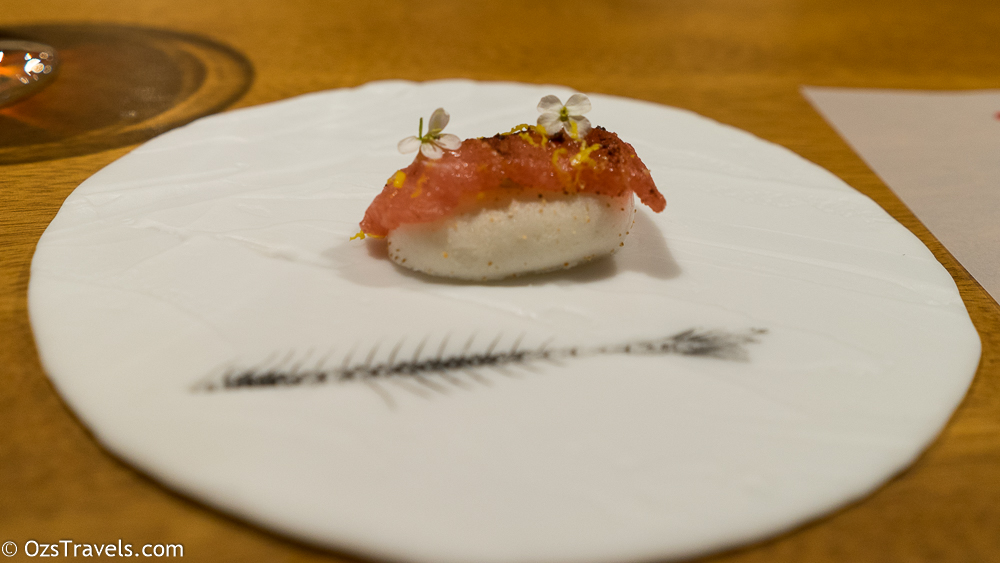 The veg version was Vegetable Sushi, also well prepared, but I do like tuna! 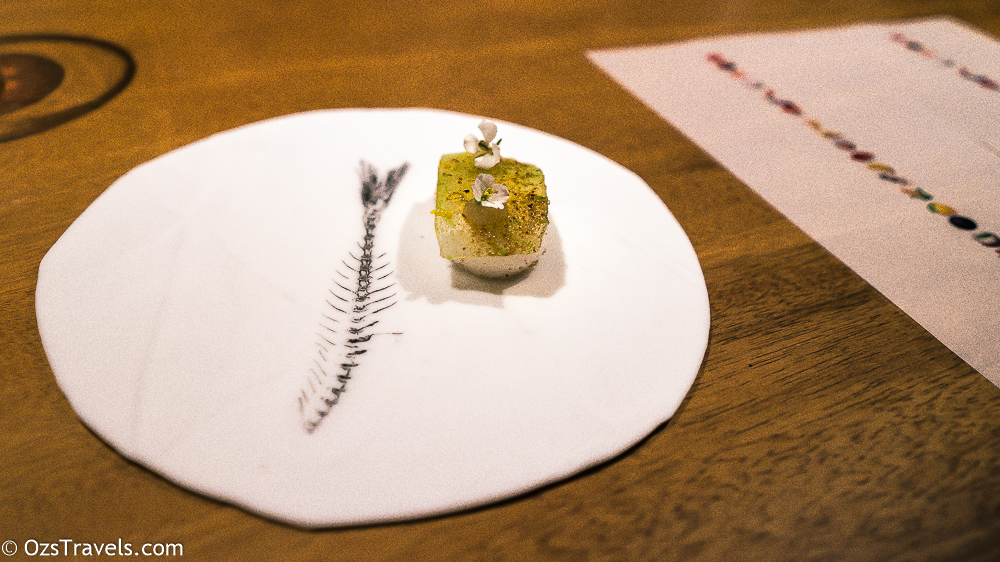 To me this was a Taco and thankfully, more Tuna. The non-veg dish was an Akami Taco and the veg dish was pickled vegetables. The metal gauze presentation “plates” are great. 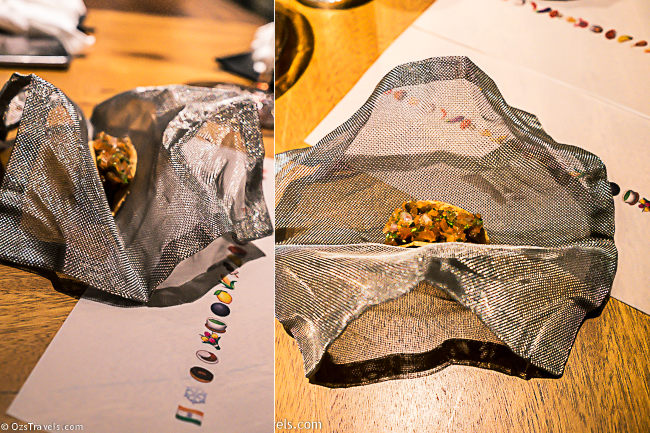 Made it to half way and so much more yum to come!

Next up was the corn course, something new for me. The veg version was corn and the non-veg was Goat Brain. Both had an interesting combination of spice and texture and were flavourful. The use of the wheat to present the food is a nice touch. 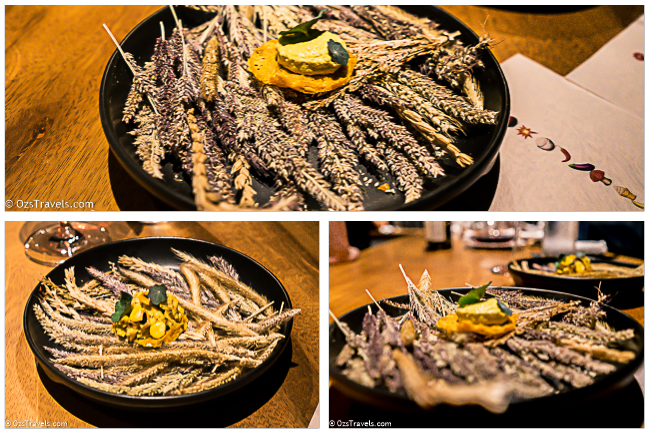 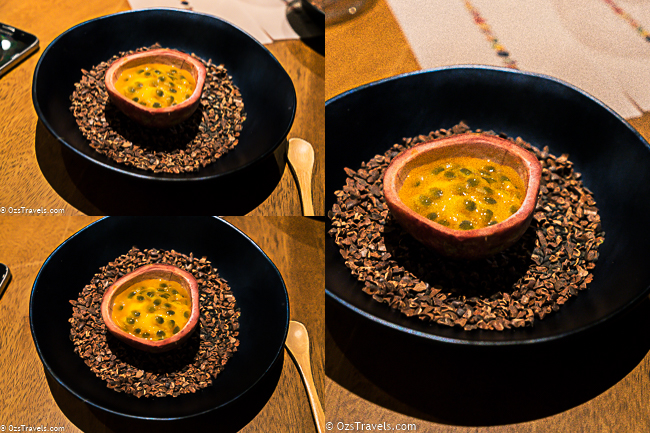 I always enjoyed the Charcoal course. The non-veg dish was Seabass and the veg dish was sweet potato both encrusted in edible bamboo ash, both were very tasty

Another of Gaggan’s standard menu items is the Tomato Matcha, always a great dish and prepared at the table. 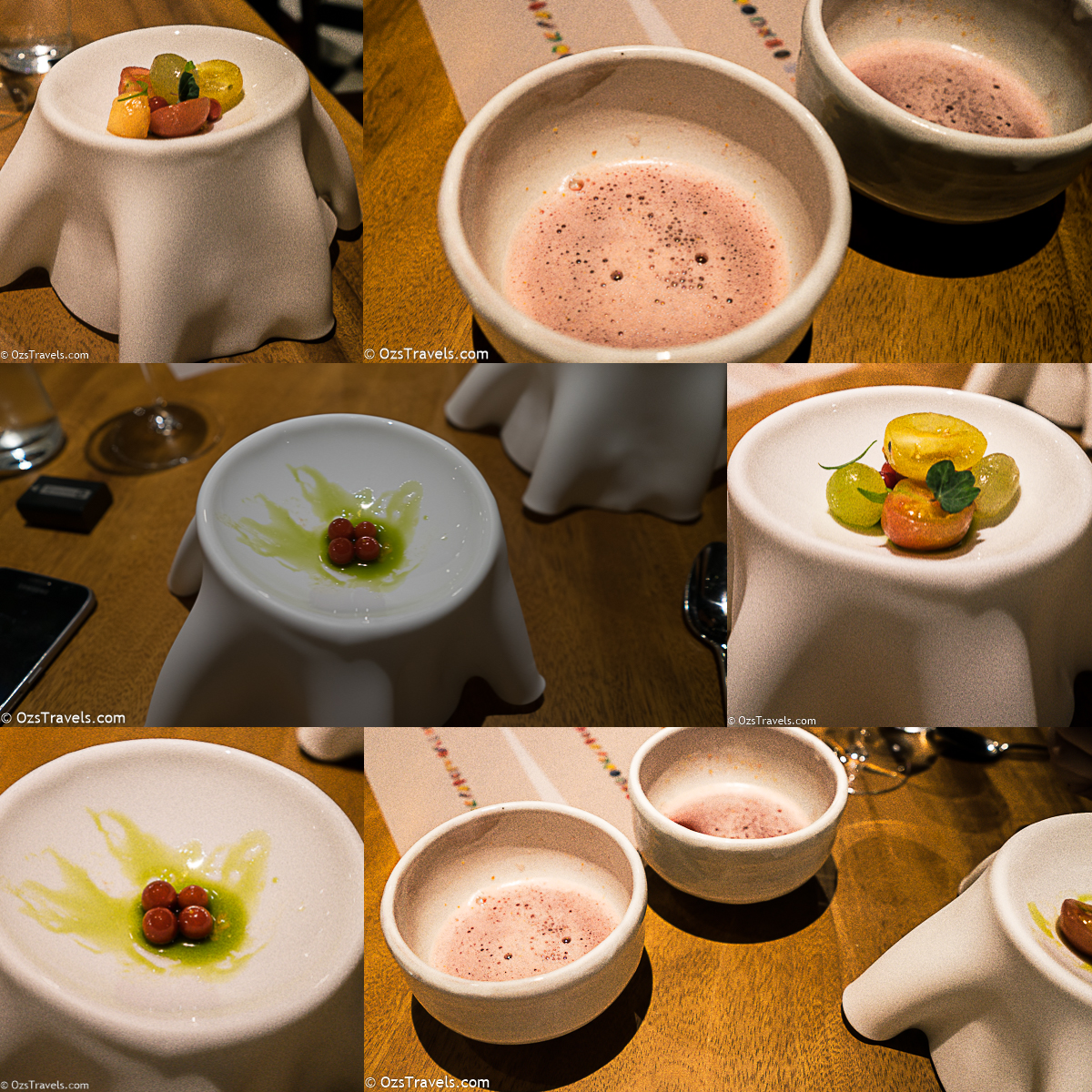 Another of the courses that I look forward to is this course. Rangoli is an art form from Nepal, India and Bangladesh and is used to decorate floors within houses and courtyards or in this case our plates. As usual the lamb chop was very tender and tasty so was the Morels Mushroom, hard to choose which I preferred, but probably the lamb. 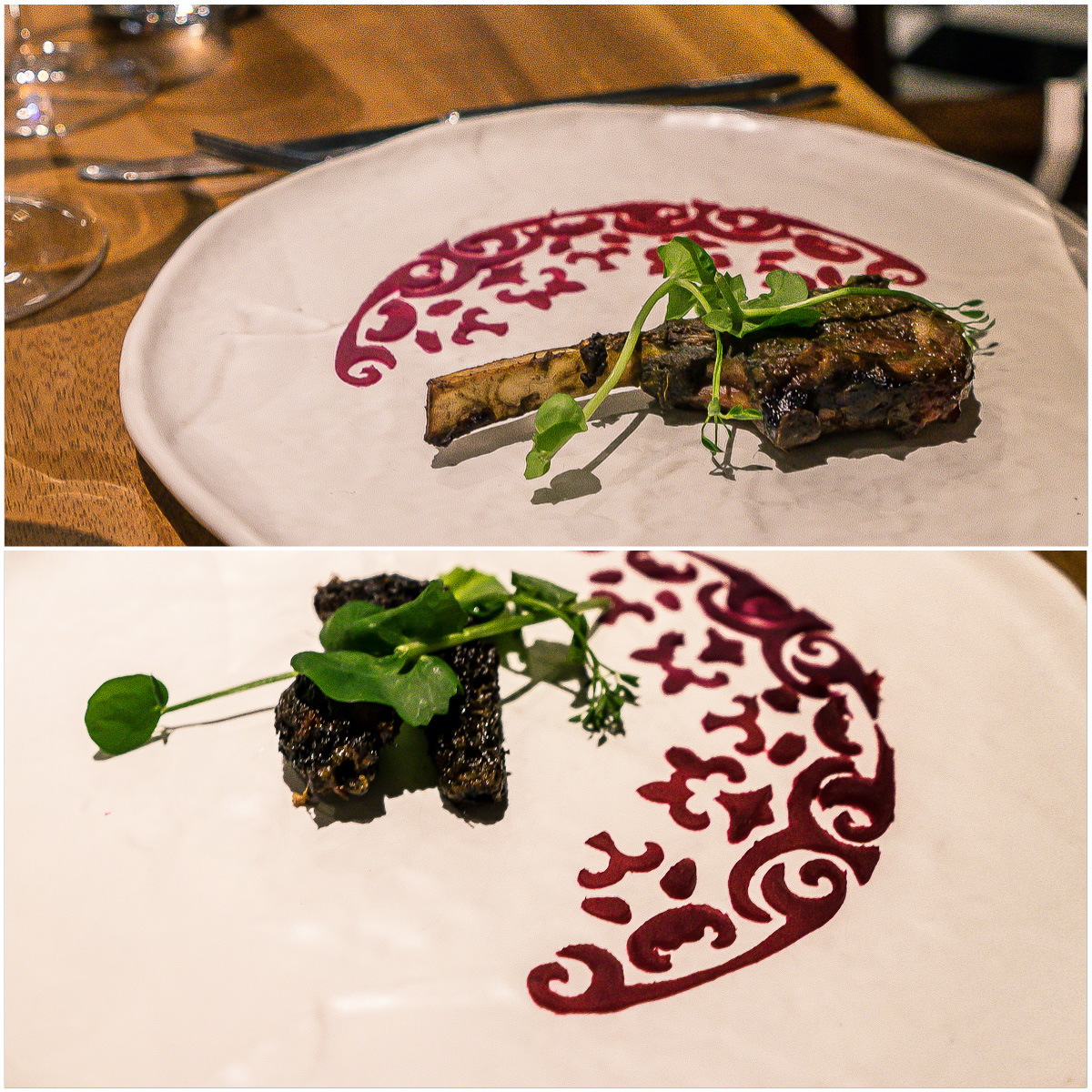 My favourite course, always one of the highlights of a meal at Gaggan. Both the non-veg, Crab, and the veg, Palak Paneer, were excellent. I am not usually a fan of Paneer, but really enjoyed this. As usual the flavours of the Crab / Paneer were balanced with the curry and spices. Always like the how the Curry is “delivered” in tiffin tins. 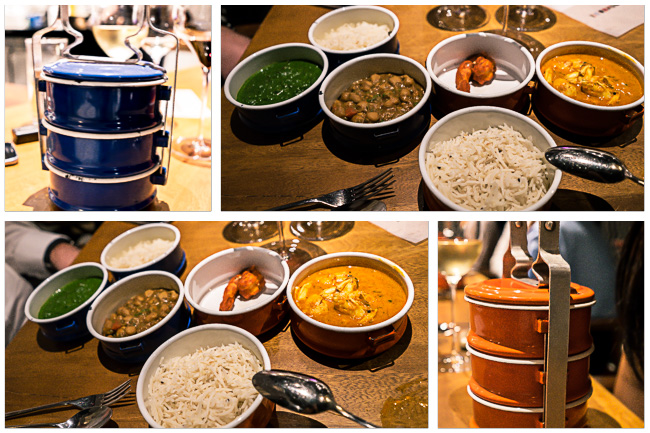 The first of the dessert courses was a Cronut, Gaggan’s version of a doughnut. Not what I was expecting for dessert, it was enjoyable. 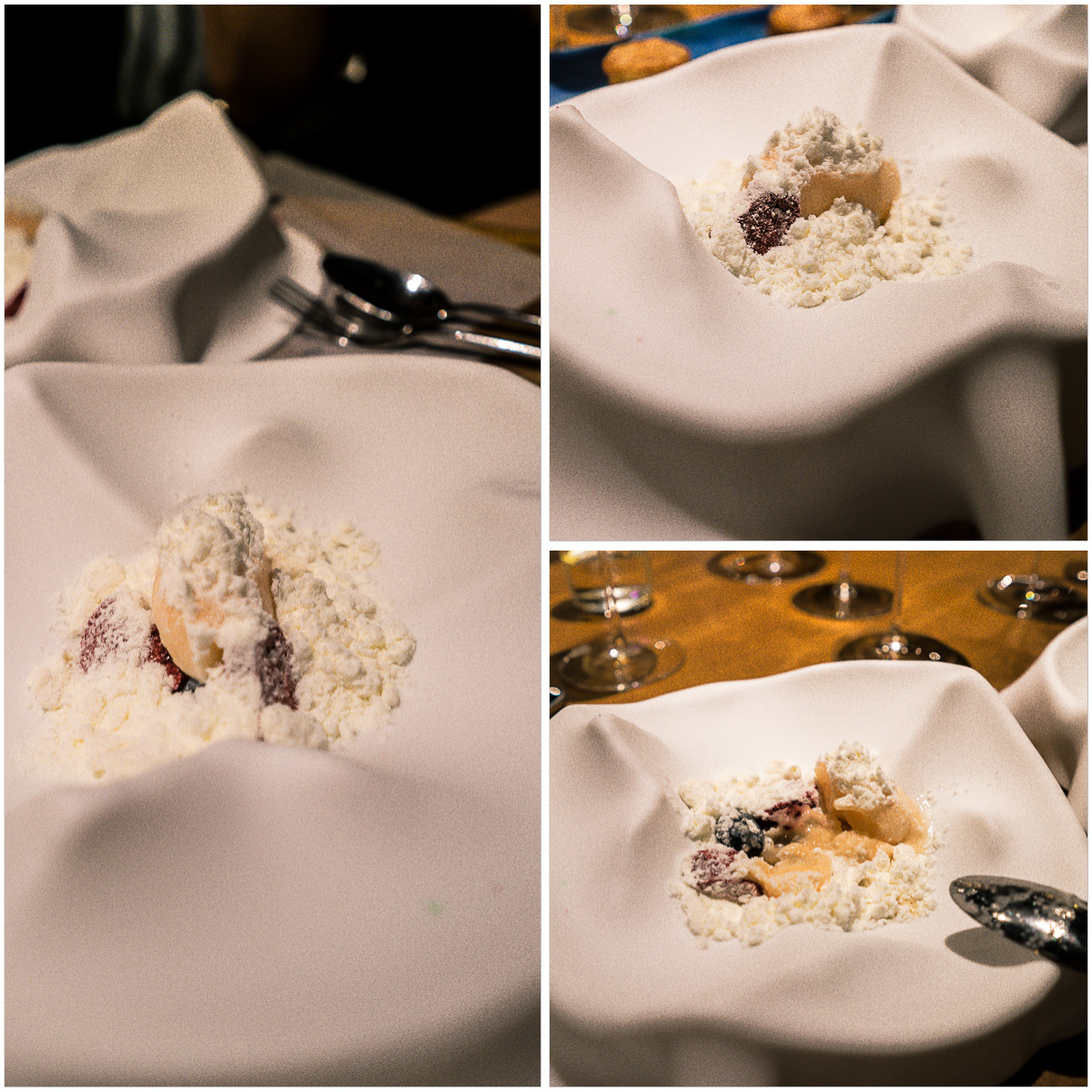 The final “dish” of the night was an Indian National Drink, I have no idea what was in this, but the rocks on top of the rice paper were like pop rocks, they kept popping for minutes, great stuff. 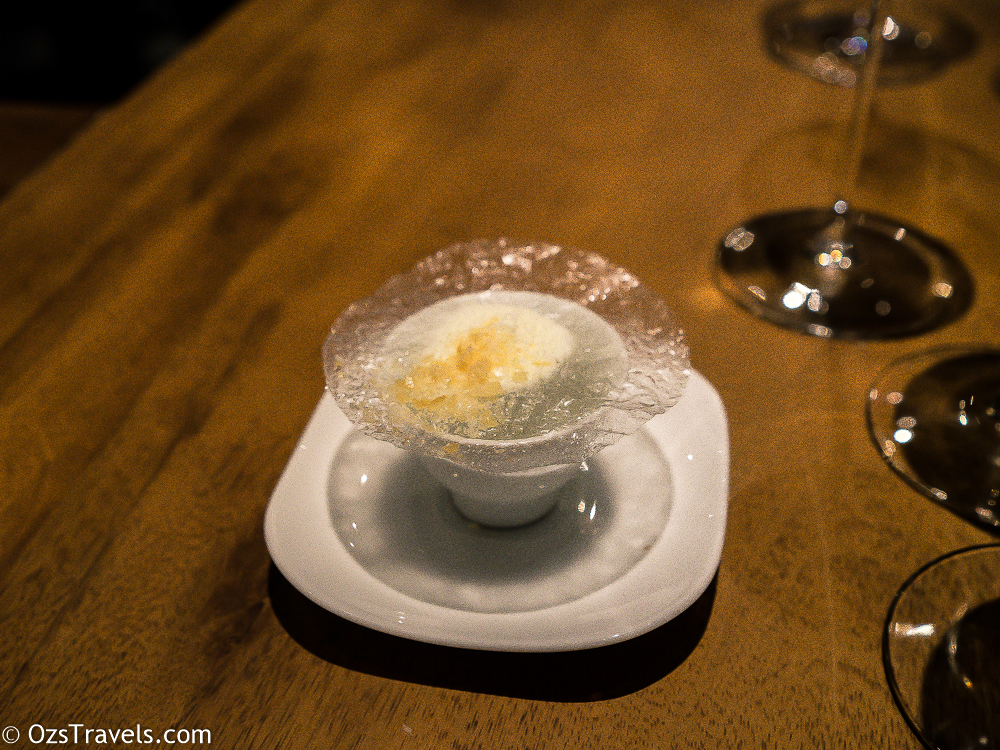 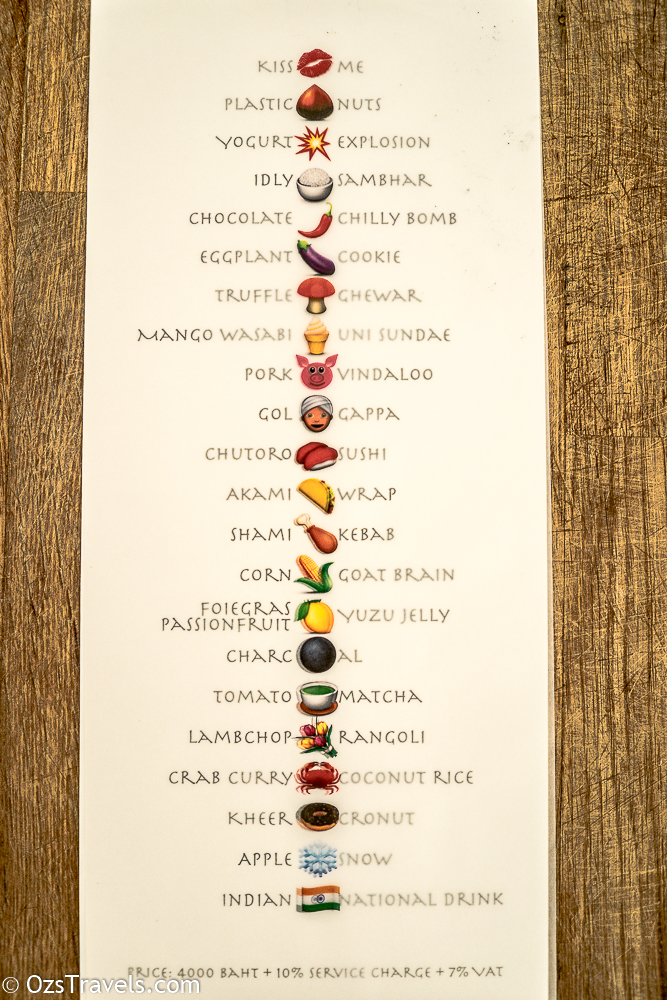 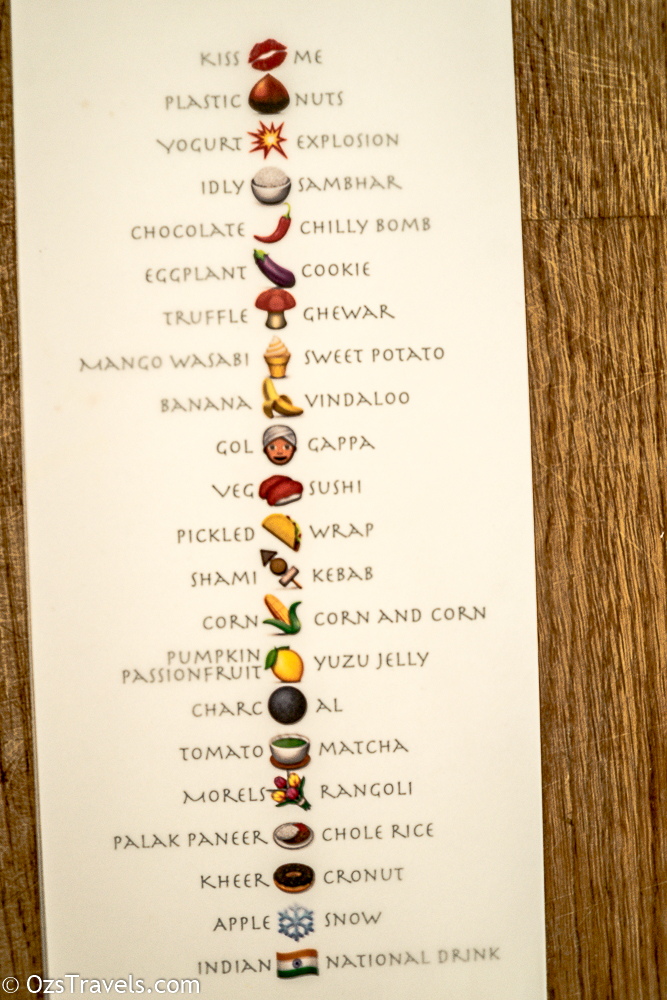 Throughout the dinner the Chefs in the Lab were always around, including Gaggan himself, continually chatting with all of the diners and responding to questions, providing us details on each dish. Very interactive and fun.

Vladimir’s wine matches were great. Really added to the experience.

Another great night at Gaggan, IMHO the best of my three visits so far. Great food, awesome wine pairing, excellent service and fantastic company, not sure how it could have been improved. Can’t wait to head back.

If you are planning on visiting Gaggan I recommend the lab and the late sitting so that you can really enjoy the experience and not rush.