For the second time this year, check out my previous post, my friends and I were lucky enough to secure another booking at Gaggan in Bangkok. Second time around it was also an awesome meal, made even more so by being sat at a table in front of the kitchen followed by a surprise visit by Gaggan Anand himself at the end of the dinner.

The menu has changed a fair bit from last time, which made it more interesting. There were a number of dishes that polarised the table, there was not much in the way of middle ground, so there was a lot of debate, which was fun. It also helped that there were a couple of Chefs at the table, including Frank Kilian one of the Singapore Tower Club’s Executive Chefs, so he was educating me as we went. 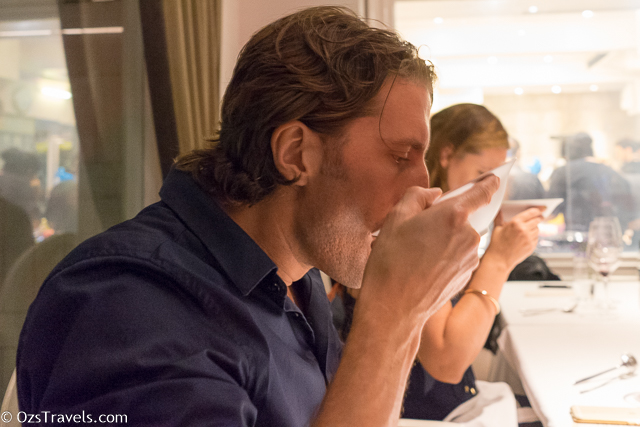 The proper way to consume soup according to Frank!

Bites – “Please eat with your hands”

A new couple of items for us. The Cherry Juice was very refreshing

This was one of the dishes we had in January 2016. It was a good as I remembered. 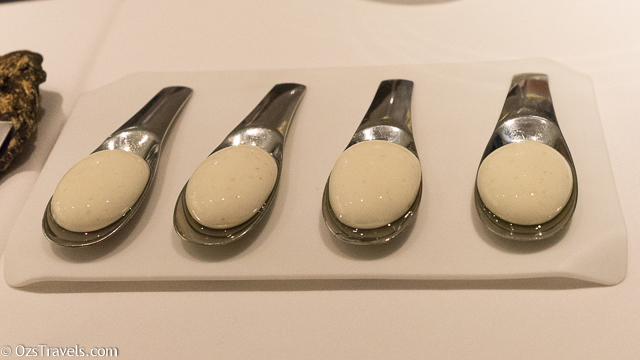 Another dish from January 2016 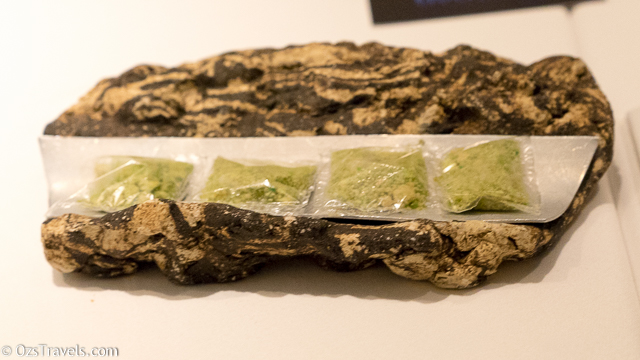 We had this in January 2016, but it was presented differently. I liked the texture, at this point it was my favourite.

A new dish, and this was awesome, knocked the Idly Sambar off top spot. Loved the spice and texture! 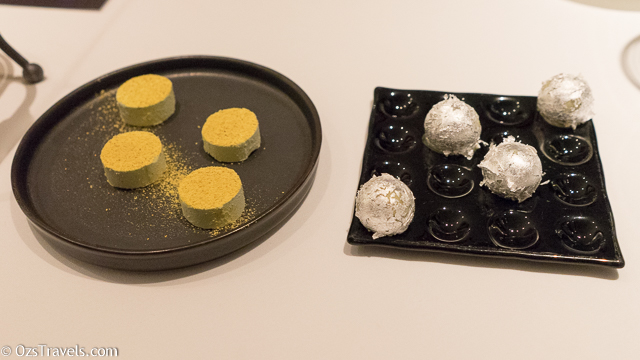 New as well, even though they looked like the Chili Bombs we had last time, it was a different filling. Another good dish!

New as well. I struggled to decide on which was better the Pork or Uncooked Curry Cookie, oh well, they are both great, so who cares! I liked how this was presented, a flexible wire mesh “stand”, Frank like it as well, guess we might be seeing that at the Tower Club’s Atlantic Restaurant in the future.

The vegetarian option was the Banana Flowers Vindaloo it disappeared pretty quick, so must have been good as well.

Interesting new dish, it was named because of its look. Tasty but, IMHO, not as good as the Cookie or Vindaloo.

Some people did not like this new dish, I did. Enjoyed the texture and flavour of the eel. The presentation on top of bowl of grains was an interesting touch. 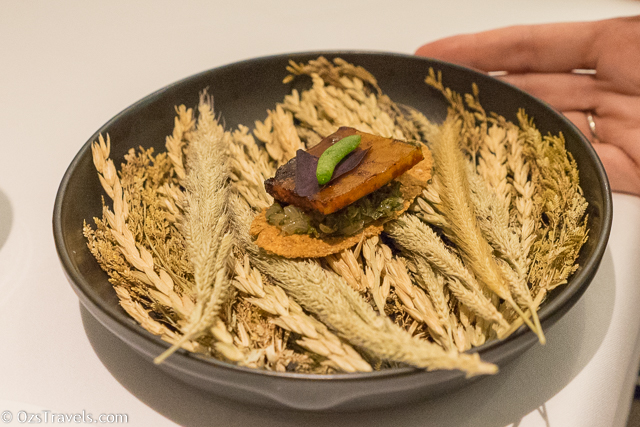 The last of the Bites was another new dish. Uni is Japanese for Sea Urchin and was one of those dishes that divided the table. I did not mind it, but others were not fans. Sea Urchin is a bit of an acquired taste I guess. 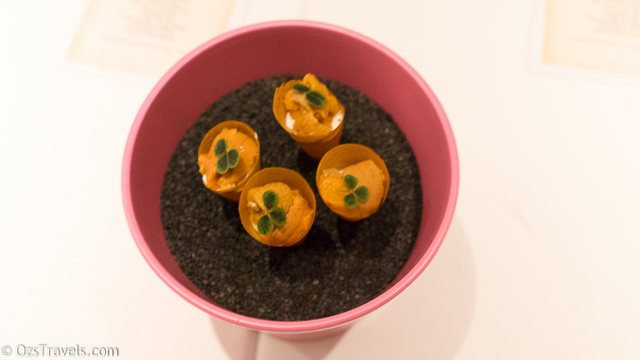 One of the things that does impress me about the food at Gaggan is the presentation and how the Non-Veg and Veg dishes are presented very similarly, guess it cuts down on the food envy. 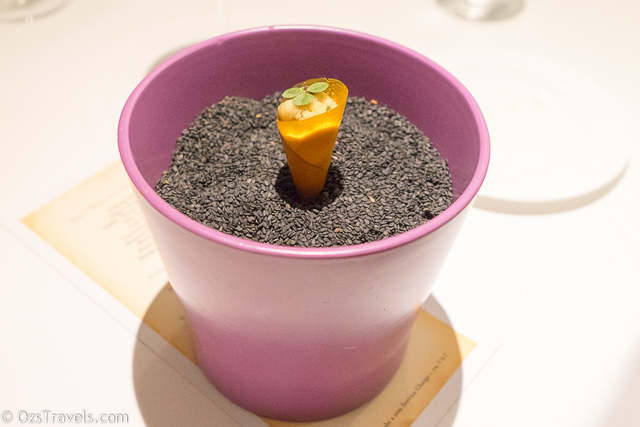 Charcoal – Be surprised. We won’t tell

This was one of the few dishes that we had already tried, interestingly most of those who had tried it before still did not guess that it was Sea Bass again. This time I found out what the “wrapper” was, it was Bamboo Ash. Very tasty! The presentation was again first rate.

The vegetarian option was Sweet Potato wrapped in Bamboo Ash. It was finished in a flash, so must have been good!

We had this last time and I found that it was a bit “stickier” and sweeter than last time. Pieces of the shell got stuck in your teeth, an interesting look when an entire table is trying un-stick their teeth all at the same time.

Another of the dishes we have had before, but very glad that it is still on the menu. The way that this is served is you receive a bowl with a Wagashi of tomatoes and fruits and then, once you have eaten the tomato and fruit, the Chef prepares, at the table, a hot tomato shorba.

This impressed Frank as the tomato shorba was made from a dehydrated tomato powder that is made on site, apparently this is an extremely time consuming exercise and requires a lot of patience, can’t wait to try Frank’s version.

As per the menu it was an “Indian celebration design with Tandoori lamb chop”. It tasted as good as it looked! 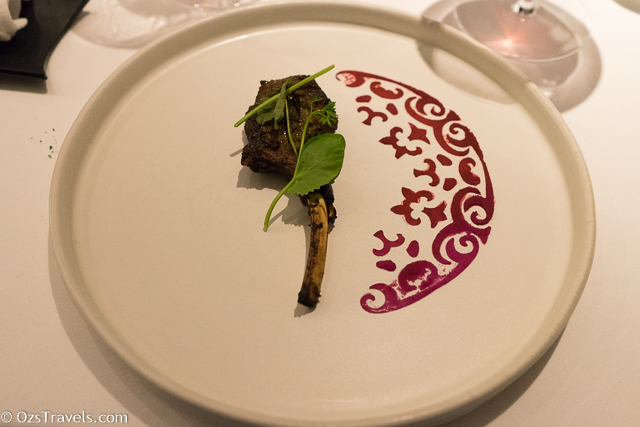 The Vegetarian option was “Indian celebration design with Tandoori morels” 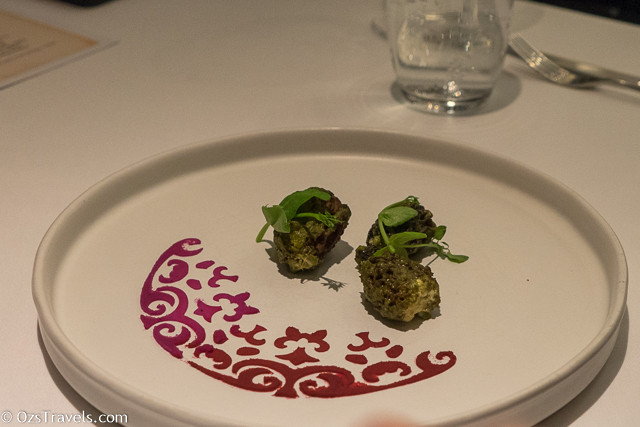 Whilst the dish has the same name as last time, it was definitely different. Our Non-Veg curry was a chicken kofta curry, with minced lamb masala and rice, the Veg curry was a Paneer malasi kofta curry, ghar ki dal and rice. There was also an Indian bread basket, just in case you needed something to help fill you up!

I enjoyed the curry, but the blue swimmer crab from last time is hard to beat! The use of tiffin tins to deliver to and serve the food at the table is a nice touch.

This was a new dish, tried to take photos of it being prepared in the kitchen, but the frosted glass made it difficult.

This dish was made with Japanese summer peach, ginger snow, and peach melba ice chutney, the dome was frozen using liquid nitrogen.

The staff then cracked the dome with large spoons, after which we fed ourselves. Apparently this was a very new dish, only on the menu for a couple of days, some of the others had seen it before, but I am guessing that what was under the dome is what was new.

This is one of Gaggan’s favourites from his childhood that he has re-created into a bite. Interesting, hard shell with a soft centre.

This was a great dish to finish the night off with. By this time of the dinner I had lost focus, so I don’t remember what was in the “sandwiches” or what we drank out of the small jugs, but it was enjoyable.

Wow, what a journey. Another great meal. The standouts for me were the:

At around the time our last dish was being served this “dude” appeared. It was the man himself, Gaggan. He was dressed down as he was not working. Vladimir “dragged” him over to talk to us. We learnt about his plans for a new R&D kitchen that he is building onto the side of the restaurant, we will be back to find out how that is as soon as we can after it is open. 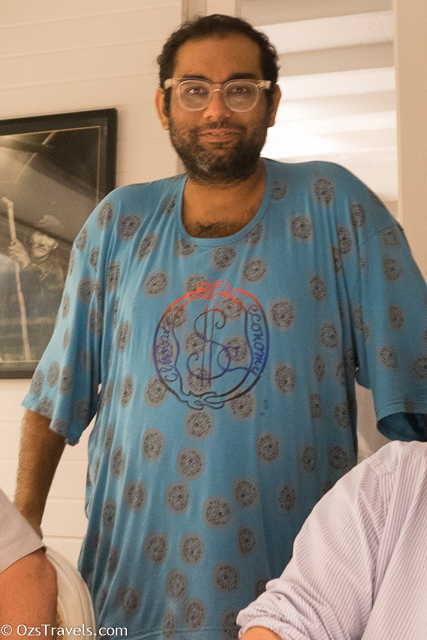 He was great fun and really topped of the night.

The table we had was right outside the kitchen, when we arrived it was a white wall, but after a few minutes we were surprised, it was an Electric Glass wall and on the other side was the kitchen. One of the happiest kitchens I have seen. It is Gaggan’s philosophy that a happy kitchen means relax staff and that in turn means better quality, he also does not expect them to work crazy hours. Definitely seems to be working

As usual we had a bottle or two of wine.

My wines of the night were the:

Gaggan is definitely one of those restaurants that you can continue to return to, as a number of my friends have and continue to. There is always something new on the menu, something that you missed last time. The crew of Gaggan also make sure that you have at least a great time.

I STRONGLY recommend going to Bangkok and visiting Gaggan, everything else you do there can be, IMHO, considered as an add on 😉