The second winery we visited on our Adelaide Hills Wine Tour was Shaw + Smith.

I had high hopes for this winery and was a bit disappointed. The tasting room is where the original restaurant was situated, it has a nice view out over the duck pond up to Mount Lofty.

My disappointment was the commercial nature of the tasting, the staff were helpful and knowledgeable, but the tasting was very impersonal and formulaic, which was the disappointing bit. The tasting was $12 per person and an accompanying cheese-plate was $6, so for $18 you get a decent taste of 5 wines paired with three cheeses. Our tasting line up was:

Whilst it was an “OK” tasting it was not great, no personality. I did not feel the inclination to buy anything, not sure if it was because nothing grabbed me, the commercial nature of the place or a combination of both, probably the latter.

Shaw + Smith began over a long lunch in 1989 when cousins Martin Shaw and Michael Hill Smith decided to realise a long held dream to make wine together. They specialise in Sauvignon Blanc, M3 Chardonnay, cool climate Shiraz and Pinot Noir.

To make exciting, refined wines exclusively from the Adelaide Hills that rank amongst Australia’s best.

Michael Hill Smith was the first Australian to pass the rigorous Master of Wine examination. In 2008 he was awarded an Order of Australia for his contribution to the Australian Wine Industry. Featured on Decanter Magazine’s power list 2009, 2011 and 2013. Michael is an international wine judge, wine consultant and strong advocate for Australian fine wine both within Australia and internationally.

Martin Shaw is a winemaker with considerable international experience. He graduated from Roseworthy College in 1981 and worked with Brian Croser at Petaluma for eight years prior to setting up the ‘Flying Winemakers’ network in France, Spain, Chile, Australia and New Zealand.
Martin continues to consult to a number of companies within Australia and overseas.

Shaw + Smith own two vineyards in the Adelaide Hills, at Balhannah and Lenswood, totalling 55 ha. The vineyards are planted to varieties that perform particularly well in the region, namely Sauvignon Blanc, Chardonnay, Pinot Noir, and Shiraz

Cousins Martin Shaw and Michael Hill Smith MW already had unbeatable experience when they founded Shaw + Smith as a virtual winery in 1989. The brand was firmly established as a leading producer of Sauvignon Blanc by the time they acquired a 42ha property at Woodside known as the M3 Vineyard (as it is owned by Michael and Matthew Hill Smith and Martin Shaw). In ?99 Martin and Michael purchased the 36ha Balhannah property, building the superbly designed winery in 2000 and planting more Sauvignon Blanc, Shiraz, Pinot Noir and Riesling. It is here that visitors can taste the wines in appropriately beautiful surroundings. Exports to all major markets.

Outstanding winery regularly producing wines of exemplary quality and typicity. Will have at least two wines rated at 95 points or above, and had a five-star rating for the previous two years. 282 wineries, 10%

Where the winery name is, itself printed in red, it is a winery generally acknowledged to have had a long track record of excellence in the context of its region — truly the best of the best. 102 wineries, 3.6%.

The style has remained fresh, aromatic, and pure over the journey. Recent evolution has been to source from higher and cooler sites, has allowed Shaw + Smith to retain a lively acidity if conditions are warmer.

Shaw + Smith have a long standing love of Riesling and believe the Adelaide Hills can produce fine examples with ageing potential. Site is most important, so much so that Shaw + Smith took a Riesling hiatus from 2010 – 2013, until this preferred site in Lenswood was selected in 2014.

Fermented cool (10-12°C) in stainless steel followed by a short maturation on lees, with a touch of the natural grape sugars left unfermented, balancing the crisp acidity. Half the grapes were whole-bunch-pressed and half were crushed before pressing, each fermented separately. The wine was blended, then spent four months on lees prior to bottling in June 2016.

Expert Ratings for the 2014 Vintage:

Predominantly from our Lenswood Vineyard, at 455 – 500m elevation. Undulating with east and west facing aspects, the soils are brown loams over clay with broken shale on the ridges. Meticulous viticulture, with cane pruning, vertical shoot positioning, and yields limited through shoot and bunch thinning to increase fruit intensity. The vineyard was planted in 1999.

This is a blend of 3 different cultivars of the Chardonnay grape. 100% hand picked and whole bunch pressed. Fermented and matured on lees in French oak barriques and puncheons (30% new) for 9 months.

2015 was a remarkable vintage. Above average winter rainfall ensured a good start to the growing season and warm weather around the New Year was followed by useful rain on the 13th of January. The season concluded with mild, stable conditions and delivered fruit of wonderful quality to the winery.

Expert Reviews for the 2014 Vintage

Per James Halliday “Next to Ashton Hills, King of the Adelaide Hills Pinots.”

Pinot Noir is the most temperamental of varieties and remains a challenge for site, season and wine-making – Shaw + Smith has joined the quest albeit in a ‘small batch’ way. First produced experimentally in 2004 and commercially in 2007. Site selection, the right clonal mix, minuscule yields and fastidious vineyard management are essential to success.

Sourced from both the Balhannah and Lenswood vineyards. A combination of beneficial vine age and our preferred Dijon clones (114, 115, 777 and MV6) delivers complex and beguiling Pinot characters in the wine. Meticulous viticulture, with cane pruning, vertical shoot positioning, and yields limited through shoot thinning and bunch thinning to increase fruit intensity.

100% hand picked and sorted fruit. A combination of whole berry and whole bunch (40%) fermentation. Fifteen days on skins. Matured in French oak barrels (30% new), the majority of which were 500L puncheons. 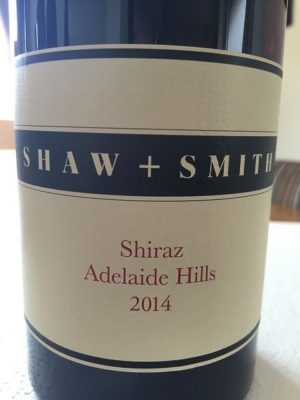 The Adelaide Hills was long considered too cool to ripen Shiraz. By the early 2000s, though, the potential for outstanding Shiraz from the right sites in the Adelaide Hills was compelling, and the first Shaw + Smith Shiraz was made in the 2002 vintage. Since then, Shiraz in the Hills has gone from strength to strength, its hallmarks being fragrance, intensity, and medium bodied elegance.

Hand picked, sorted and fermented as a combination of whole berries and whole bunches in open fermenters, with gentle plunging and minimal working. Aged in French oak (30% new) for 14 months.

2014 was not without its challenges, with small crops due to some unsettled weather during flowering. In mid-February, a string of half a dozen hot days ended with a significant amount of rain over 24 hours. The following four weeks of dry, mild, and sunny weather from late February was just what the vines needed, and the results are very exciting.

The grapes are from low yielding vines predominantly at Balhannah, in the central Adelaide Hills, and Macclesfield, the warmer and drier sub-region to the south. Low yields achieved by aggressive pruning and pre-harvest bunch thinning.